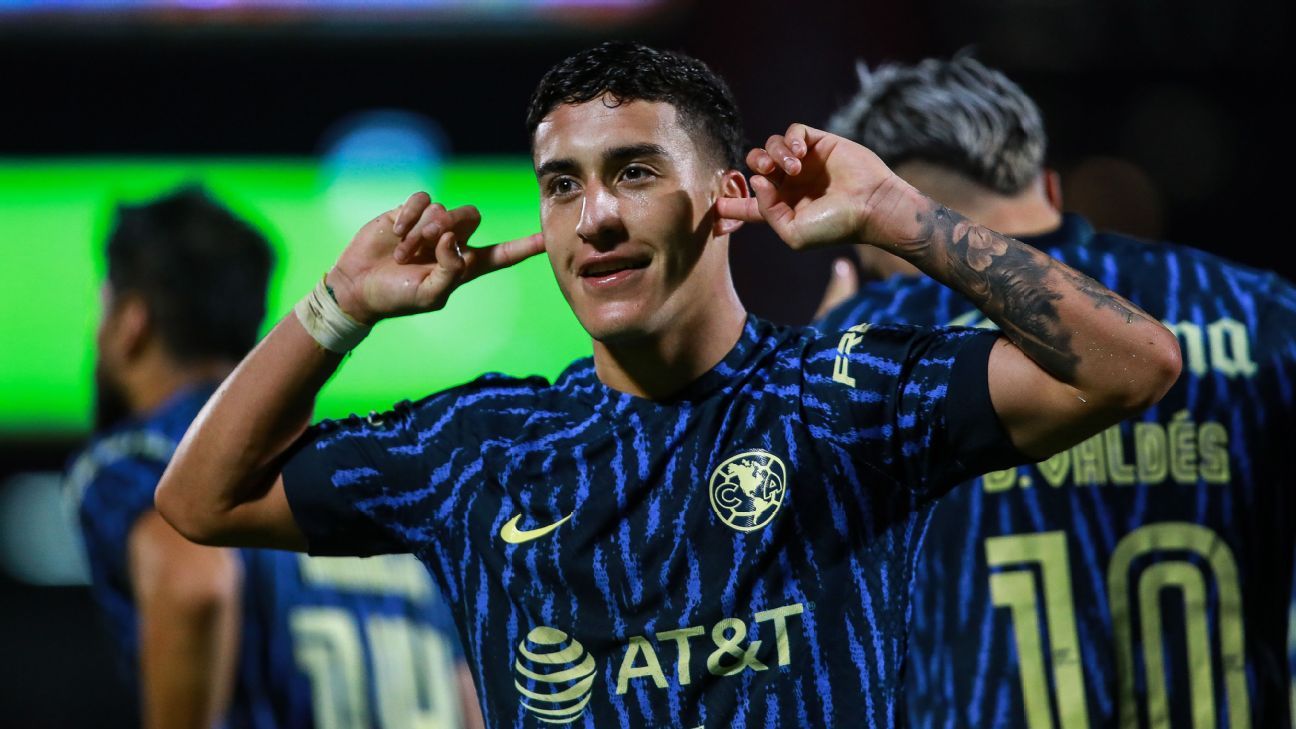 Every January, the turn of the year ushers in immense optimism for a brighter tomorrow, that this year will be the year. That’s especially true for the U.S. men’s national team, which calls up a predominantly MLS-based squad of young players and promising prospects to get their first taste of life with the senior national team.

This year’s roster is full of fresh faces, names that will get fans and analysts alike excited about what’s to come. Monday marks the beginning of a week in which the USMNT will play a pair of friendlies — Wednesday against Serbia, Saturday against Colombia — that will allow us our first proper look at many of them.

So, without a full-time manager — assistant Anthony Hudson takes the reins with Gregg Berhalter out of contract and no decision yet made whether he’ll be offered a new deal or will be replaced on the road to the 2026 World Cup on home soil — ESPN’s Jeff Carlisle and Kyle Bonagura sat down to discuss what they’re most excited about this week in Los Angeles.

Carlisle: Invariably, at least one or two players emerge from every January camp and prove they deserve a bigger role. I was looking at Dave Sarachan’s roster in 2018, and Walker Zimmerman was in there. Tyler Adams was in there, too. Each had only one cap at the time they were brought in, so you never know which players are going to develop and make the most of their opportunity. Obviously, big things were predicted for Adams, but Zimmerman was one of a handful of defenders whose potential was really unpredictable.

Bonagura: There’s always some value in the January camps for those reasons, but the dynamics here are much different than we’ve seen in several years. When Sarachan was the interim coach, the roster was essentially in need of a complete reset, so it was helpful to hand opportunities to younger players who were in line for important roles. The competition to earn a meaningful role this cycle will be much more difficult, and without a full-time coach in place, any sort of positive impression a young player makes in the camp won’t carry over.

At the same time, though, anytime you can see these up-and-coming guys together on the same field, it’s going to carry some level of intrigue. Brandon Vazquez is a guy that many fans thought should make the World Cup team after such a good year with FC Cincinnati. So for a player like him who has a real chance to work his way into the mix as a potential contributor in this cycle, I think it’s a great opportunity to get a taste for this type of environment.

Carlisle: I would add that just as guys can rise up, guys can fall, too. When a John O’Brien comes out of a 2002 World Cup, you’re expecting him to be a mainstay for the next decade. It didn’t work out that way. Stu Holden was another such example; the injury bug just crushed his career. The team that was just at the World Cup is young and talented, and it seems like for some of them, the ceiling is really exciting, but it’s not guaranteed.

Bonagura: That’s kind of why it’s worth paying attention, right? Because the team is in a place now where it’s trying to build and establish quality depth.

The most talked-about call-up in this camp is Club America attacker and Mexican-American Alejandro Zendejas. What makes him special, and what can we expect from him when the USMNT already has so many talented attacking options?

Carlisle: For me, it’s his end product, which has been a problem for the U.S. as we saw at the World Cup. For every player that is engaged in a tug of war between the U.S. and Mexico, it doesn’t always end up being as big of a deal as it seemed at the time, but he has been a contributor for one of the biggest teams in Mexico. America is a huge club that gets a lot of attention, and with that comes a lot of pressure and expectation.

However, this whole camp is less than ideal because it’s not nearly as long as some of the other camps. Zendejas jetted in after a sensational performance in his Liga MX game against Puebla on Saturday, is expected to play against Serbia on Wednesday, and then then he’ll go back to Mexico City. So it’s going be a brief glimpse, but they wouldn’t be bringing him in, in that manner, if he wasn’t going to play. Given the attention that’s been put on Zendejas, it’ll be fascinating the extent to which he delivers on those expectations.

Could he make some headway with the full group? We’ll see how much he’s able to challenge guys for playing time, but as much as the U.S. had depth in the wing positions, at least during qualifying, they also sustained a lot of injuries. Christian Pulisic missed time. Giovanni Reyna missed time. I still think Brenden Aaronson‘s best position is still up in the air. I don’t think you can have too many options in attack.

Bonagura: You can’t have too many of those guys, especially considering the U.S. wingers don’t have a great track record with injuries. I think the other interesting part to consider here is that we don’t know how the next manager is going to want to set up the team. We’re kind of conditioned to view everything through the 4-3-3 that they’ve been using under Berhalter, but who’s to say that the next manager doesn’t change that up? And as a result, the player profiles are different and they’re slotting on the field in different ways.

Until we have an understanding of what the U.S. will look like tactically, all of these questions don’t really have firm answers.

Apart from Zendejas, which other debutantes are you most excited to see get a taste of the senior international game?

Bonagura: Vazquez and Zendejas are probably the names that have the broadest interest, but there are several players I’m looking forward to seeing.

When you look at the depth chart of the U.S., there’s not really a clear backup option for Adams at defensive midfield — he’s so clearly ahead of anyone else who plays that position. So from that standpoint, I’m curious to see if Aidan Morris can work his way into that conversation. He looked so good coming up and had the injury setback, so this will be a good opportunity for him.


Then I think Julian Gressel is an interesting name to see on this list, just because of the backstory there. The fact that the German-born wide midfielder has been one of the better players in MLS for a long time now, was able to get citizenship and is now qualified to represent the United States through that process at 29 years old makes for a cool story.

Carlisle: Another name I’d throw in there is Eryk Williamson. He’s had a few extended looks under Berhalter, but obviously an injury kind of sidetracked him a bit. Now he’s back.

There was a lot of love directed towards the midfield trio of Adams, Musah and Weston McKennie during the World Cup, but I think there’s a concern in that group that there’s not enough quality on the ball. Williamson is a guy who I think provides enough on the defensive end, and when combined with his offensive ability, is a guy to watch to see if he can move up this cycle.

And then a total flyer is Sam Rogers. This is a guy who the Seattle Sounders flat out told wasn’t tough enough, wasn’t physical enough. So he took a path through the USL, and then he landed in Norway. He logged a lot of minutes last year for Rosenborg, which is one of the biggest clubs in Norway, and scored six goals as a center-back along the way. And that’s just in 23 appearances.

It’s difficult to judge whether he’ll see the field with Zimmerman and Aaron Long in camp, but I think Rogers is an interesting prospect, and we’ll see whether he’s able to parlay his time in Norway into a move to a bigger league.

Gabriel Slonina and Paxten Aaronson are both in this team, having just joined clubs in Europe this month. Would they have been better served by remaining with Chelsea and Eintracht Frankfurt, respectively, and getting settled in to their new homes?

Herculez Gomez and Sebastian Salazar debate the biggest storylines and break down the best highlights that soccer in the Americas has to offer. Stream on ESPN+ (U.S. only)

Carlisle: This is kind of where all January camps are not created equal. This is a much shorter timeframe. It used to be for the whole month of January whereas this year, camp started on Saturday and the final game will be seven days later. So I don’t think that it’s necessarily going to take a huge bite out of Aaronson’s time with Frankfurt.

And all of this gets done with the club’s blessing. They didn’t have to release him. If they wanted him to stay, they could have put their foot down. I think in their minds, it’s probably a situation where maybe he gets a competitive game or two that he otherwise wouldn’t have gotten with his club.

For Slonina, I think it’s a no-brainer. We’ll see if he plays because Sean Johnson is there as well, but I think for Slonina’s position and where he sits in the Chelsea hierarchy, I think it makes a ton of sense because he could get a competitive game or some competitive minutes he wouldn’t get with Chelsea.

Bonagura: In that similar vein, it’s interesting to see Matthew Hoppe‘s name on this list, too, because his career path over the past few years has been bizarre.

He kind of unexpectedly rises up in Germany, scores that hat trick with Schalke 04 that gets everyone really excited, moves to Spain, then moves to the Championship in England — where he’s played six games for the first team and five for the reserves — and now he’s in a January camp in the middle of a season. That’s not the trajectory anyone would have liked for him.

It also doesn’t feel like a great sign that that Middlesborough released him in the middle of their season — more so than the other guys that have just joined up with their clubs. And I thought he was impressive in the Gold Cup. He hasn’t been able to capitalize on that at all.

What are your expectations from these Serbia and Colombia teams, who also won’t have several of their first-team regulars?

Carlisle: These will be competitive games for this group of U.S. players. No one’s really expecting Serbia and Colombia to bring anything close to their first teams, but it’ll still be a good challenge for this group. For the players that are on the current roster, it’ll give them a different look.

Another thing I’m pleased about is that it wasn’t some run-of-the-mill CONCACAF opposition that got scheduled. Stylistically, it’s going to take these guys out of their comfort zone a little bit. I think that’s a positive.

Bonagura: I think the other positive about the January environment, generally speaking, is that because the other countries have the same scheduling issues as the U.S. team does, they also feature younger players looking to make an impression on their coach. We’ve seen full-team friendlies before where it feels like guys are going through the motions; at least here, you would expect the energy and effort level from other teams to be high. That doesn’t mean it will allow for much clean soccer, but it’s something.