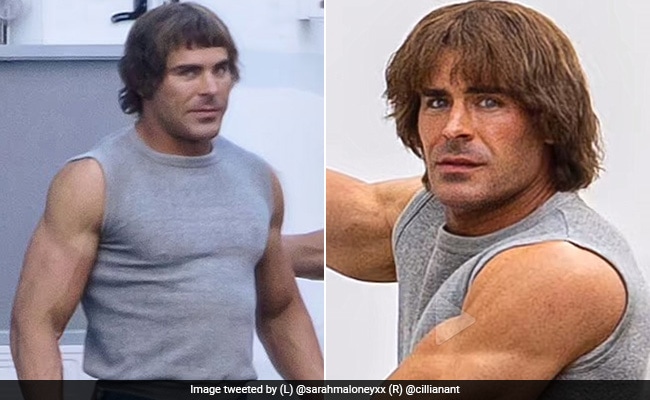 Hollywood star Zac Efron looked unrecognisable to fans as pictures of his new look – complete with bulging biceps and a brown pudding bowl wig – surfaced on social media. In the now-viral images, the actor and singer was seen wearing a tight grey T-shirt with a round neck, ripped denim shorts and a wig with short bangs and wavy hair that reached his ears.

Twitter users were quick to quick to react to the pictures and compare Mr Efron to various fictional characters. Many of them wrote that the actor looked like the “Shrek” character Lord Farquaad, who had short black hair with bangs and was short in stature.

“Not zac efron becoming lord farquaad’s lost brother,” wrote one user while sharing an image of Mr Efron’s new look and a picture of Lord Farquaad.

“Zac Efron looks like if Lord Farquaad was an ’80s fitness coach,” said another.

A third hilarious even compared the actor to the famous hero of the 80s, He-Man, while a fourth wrote, “Zac Efron is out there looking like he’s the Incredible Hulk without makeup”.

Zac Efron looking like he’s about to shout “I HAVE THE POWER!” pic.twitter.com/UB4aVPoDae

Meanwhile, the reality is that Zac Efron was photographed filming for his new role as former American professional wrestler Kevin Von Erich in “The Iron Claw“, PageSix reported.

The upcoming film, directed by Sean Durkin, focuses on the story of the Von Erich family and their incredible impact on the sport of wrestling from the 1960s to today. The movie is set to be released in 2023.

Imran Khan Shot At Rally, One Gunman Had Pistol, Another Rifle: Reports