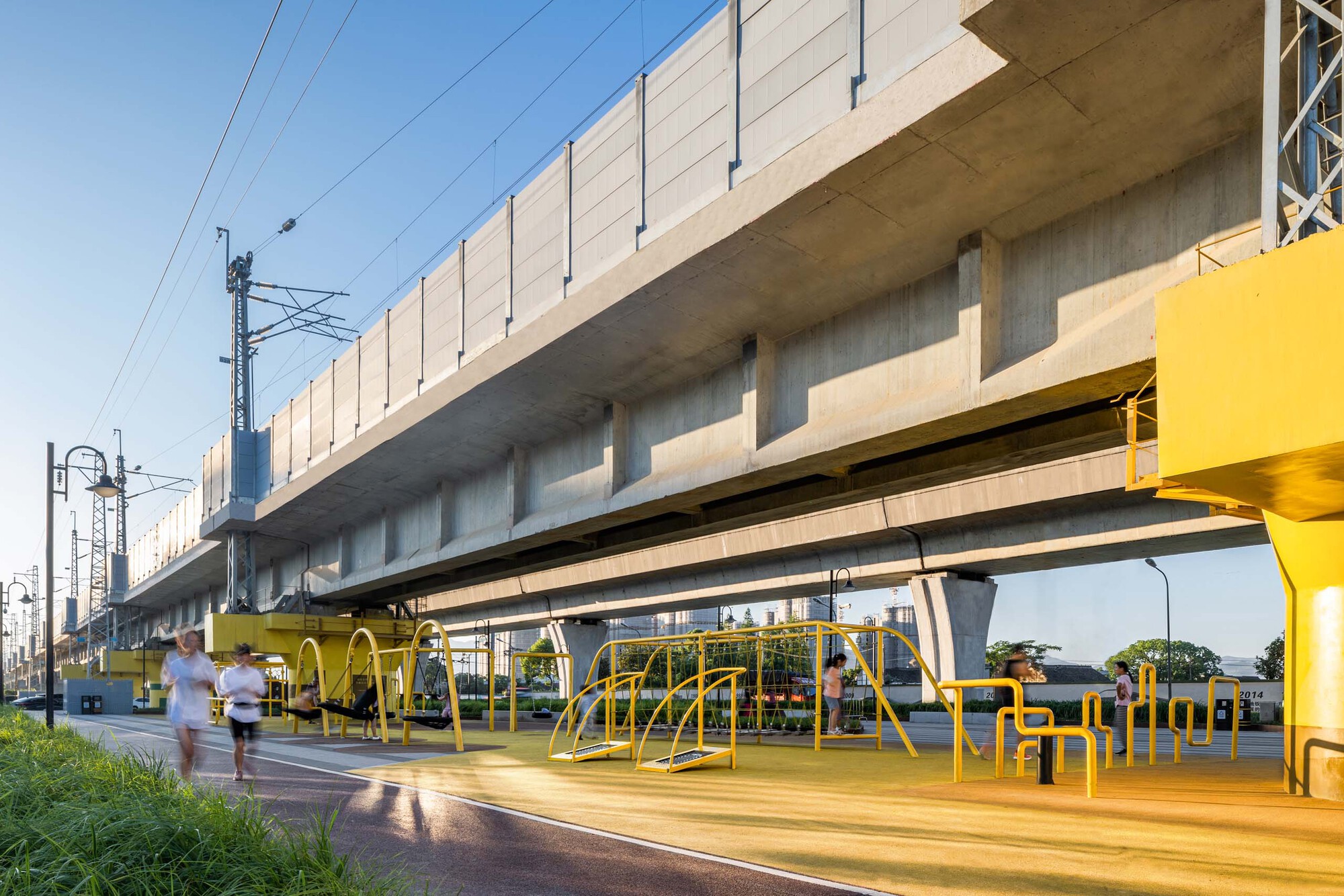 Project overview. The project is located in Wuxiang Town, Yinzhou District, Ningbo City, starting from Aimin Road in the west, Houtang River in the east, and Shanhua Road in the south. The site is adjacent to the abandoned ground section of the Beilun Branch Line of the Xiaoyong Railway, Metro Line 1, and the elevated section of the Xiaoyong Railway. It is about 987 meters long and the width of the interior land is about 8-52 meters. It is a rare abandoned railway reconstruction project in Ningbo City.

Design concept. From the start of construction of the Xiaoyong Line in 1910 to the official opening of the metro in 2014, the Ningbo Railway has spanned a hundred years, witnessing urban development in changing times. After an in-depth excavation of site characteristics and railway context, the design team summarized and extracted a systematic design language and form which intends to introduce the century-old social evolution. The past scenes are described in detail so that visitors can experience the strong local cultural atmosphere in a relaxing environment.

Project Features. Route weaving and connection, three-line coexistence. The original site and the surrounding environment are composed of three linear spaces that develop in parallel. The space separated from each other makes it difficult to meet the strong travel demand in Wuxiang Town, and the corresponding benefits brought by railway transit also cannot be effectively guaranteed. In order to solve this urgent and practical problem, the design team connected the north-south space by constructing a landscape area that combines practical functions and local features. On the basis of continuing the existing village texture, it ran through the breakpoints of the road network between the lanes and the site, highlighting the experiences in the streets and alleys. The road network interweaved horizontally and vertically and interpenetrates each other, which realized the development of the site and the surrounding environment with efficient and convenient traffic flow organization that conforms to the local mode of transportation in the long term.

Centennial Railway, History Lecture Hall. The abandoned roadbed of the original railway is used in the design, and the railway cultural symbols such as railway tracks, sleepers, and signal lights that are left in the current situation are preserved, and the original design elements such as train facade fences, station logos, and platform signs are combined to further strengthen the atmosphere of the place, which reproduce the prosperous scene on the Beilun line of the Xiaoyong Railway in the past. The design team also used the railway soundproof screen as a carrier to turn the history of the site into an easy-to-understand picture scroll, using a vivid and lively form to build a historical and cultural promenade that brings an immersive experience to the visitors.

Neighborhood water town, hustle and bustle in the city. With the rapid development of urbanization, the spirited and vibrant living atmosphere among the neighbors in the village is gradually lost. The design intention is to respect the existing village lifestyle, so as to create a livable and dynamic backyard garden in the neighborhood. In order to retain the image of the water town and the imprint of the growth of the local people, the design team built a public space where the residents can enjoy many interactive activities. It stimulates the enthusiasm of the residents to participate and realizes the Integration and symbiosis between traditional living areas and emerging business types.

Comprehensive benefits. This project actively explores a new path for railway landscape development in a complex engineering environment, connects villages and metro hubs through a complete spatial interconnection network, relieves the commuting pressure of surrounding communities, and can effectively promote the revenue of railway transit. The functional setting based on community co-construction can further enhance the sense of identity of the place and expand the traditional production methods and living boundaries of local residents. In addition, the design emphasizes the landscape expression of the local cultural context, using historical translation and situational experience to integrate the local charm of the railway era. The design is full of touching qualities of people, which create a cultural symbol unique to Wuxiang Town.