”Wholesome”: Friends Of Indian Groom Sport Saree And Bindi During His Wedding In Chicago 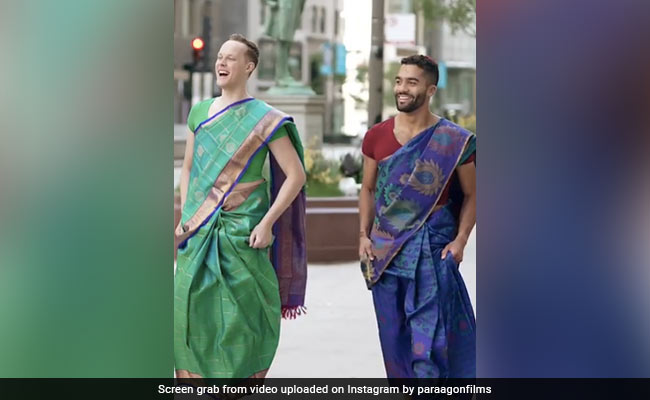 There are no boundaries when it comes to fashion. While women have adopted male clothing throughout the years, men, too are slowly embracing attires that come with a tag of ‘only for women’. In one such instance of smashing gender stereotypes, two men were seen sporting sarees as they headed to their Indian friend’s wedding, held in Chicago.

Paraagonfilms, who are Chicago-based wedding videographers, shared the video on their Instagram handle, and wrote, ”Just a typical wedding morning with the groom’s 2 best men walking down Michigan Ave in sarees.”

The video shows a woman assisting the boys in wearing the saree, as they get ready for their friend’s wedding. The duo is then seen gracefully walking down Michigan Avenue in Chicago to attend the wedding, sporting colourful sarees. They even completed the look by adding bindis on their foreheads. As soon as their Indian friends – the bride and groom – saw their unusual clothing, they burst out in laughter. The video ended with the trio hugging each other and smiling.

The clip has collected over 28,000 likes and over 150 comments so far. Social media users couldn’t get over how adorable the whole gesture was. The act also opened a discussion on social media for breaking stereotypes around gendered clothing. Many called it the best surprise, while others hailed both men for wearing ethnic outfits and appreciating their friend’s culture.

One user wrote, ”That is so wholesome. Absolutely adorable.” Another commented, “The guys are getting more creative!!! Love it!!!” A third said, ”White men look beautiful in everything lol !!! They are looking so graceful with the beautiful pleats of sarees. This is so wholesome.”

Previously, Pushpak Sen, a youngster from West Bengal went viral on social media, as he was captured strolling through Milan, wearing a saree.