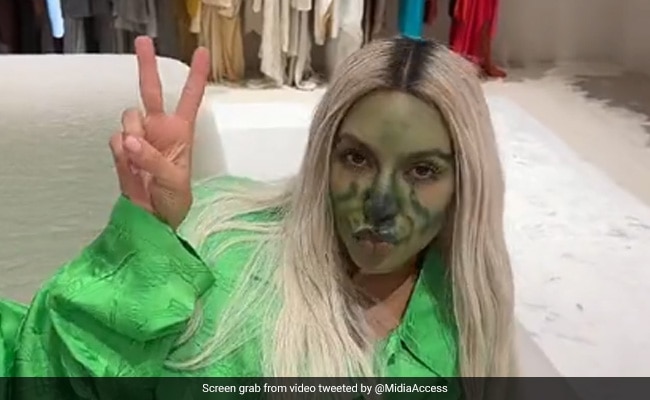 Kim is seen posing for the camera in an embroidered green shirt.

Kim Kardashian is well known for her fashion sense and makeovers. However, this time around, her daughter, North West, transformed her into the Grinch.

The video was originally shared on November 21 on North West’s joint TikTok account with her mother. The child decks up her mother in a Grinch-inspired costume in the eight-second clip. The reality TV star is seated in her dressing area while the little one starts painting her face in the clip. The video features the well-known song “You’re a mean one, Mr. Grinch.”

The nine-year-old begins by applying concealer on Kim’s face and blending it. The Grinch’s skin tone is then recreated using various green hues. North West also applies extra green eyeshadow to complete the look after using tape to create the ideal winged eyeliner. Lastly, she uses a dark green eyeliner to draw on the Grinch’s frown lines. As she completes the makeover, Kim is seen posing for the camera in an embroidered green shirt.

Kim said that her daughter was interested in doing unboxing videos and cosmetic tips on YouTube in a 2017 interview with WWD. At that time, North West was just four years old.

“You know, the other day, it was so funny,” Kim added. “My daughter watches so many YouTube tutorials and videos, and she was unboxing the My Little Pony ColourPop collection, and I thought to myself, ‘I wish I was recording this,’ because her reaction was so funny,” she continued.

“And then she did makeup on the My Little Pony that they gave, and she said, ‘Mom, I want to do a YouTube video,” the SKIMS founder told WWD.

US High School Bans Mobile Phones, Students Are Happier Than Ever: Report