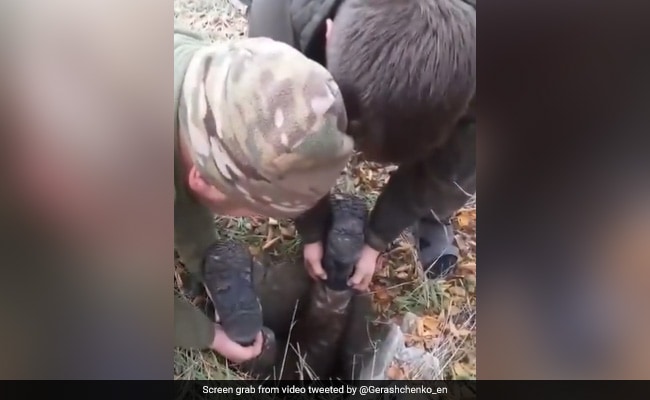 Assisting animals who can’t communicate their needs is one of the purest and kindest things we can do as humans. Thankfully, there are many good Samaritans among us who don’t shy away from helping another fellow human or an animal in need. One such heartwarming video going viral on social media shows three Ukrainian soldiers rescuing a dog that had fallen inside a very deep pit. Even as the war rages on, volunteers and soldiers in Ukraine are doing their part to give citizens hope.

The clip has been shared on Twitter by Anton Gerashchenko, Ukraine’s Advisor to the Minister of Internal Affairs. He credited the video to a TikTok user who uses the handle @pavyk9525. “Our Defenders rescued a doggie,” the caption reads.

Our Defenders rescued a doggie.

In the video, a soldier is seen going down into a pit while his fellow mates hold his leg to save him from falling. A few seconds later, they can be seen pulling him back, who came up with a small puppy in his hands that had fallen inside the pit.

The video has gone viral with more than 50,000 views, and 700 shares. Social media users showered love on the clip and were full of gratitude and appreciation for the soldiers.

“These are mensch. Ferocious in battle and compassionate away from the front lines. What a country,” wrote one user, while another commented, “I freaked out….they didn’t even have him tied off….no safety line & those 2 gents are STRONG to be able to hold him long enough AND pull him back out….STUNNER EH!”

A third user wrote, “I can’t thank these amazing Defenders enough. The poor little puppy must have been so terrified. Fantastic to see once again that every life matters to Ukrainians.” A fourth said, “The world loves the Ukrainian fighters for their love of animal life.”