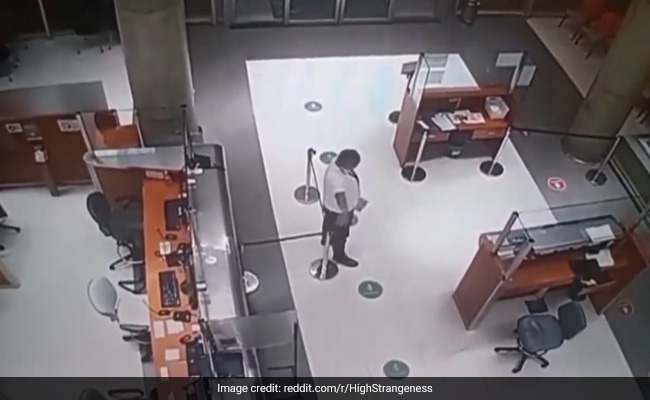 The security guard is seen talking to a ‘ghost patient’ in the video.

A video from Argentina has spooked social media users as it shows the security guard at a hospital talking to someone who is not visible. The stunning footage of the ‘ghost patient’ is being circulated widely on various social media platforms and has amassed millions of views. According to descriptor of the video, it has been captured by the CCTV installed at the hospital at 3am. The clip 38-second clip has received nearly 4,000 upvotes and over 400 comments on Reddit.

As the video starts, the door of the hospital’s reception area opening on its own. The security guard hears the noise and gets up from his seat, picks up the clipboard and proceeds towards the door.

He removes the line divider to let someone in and starts talking to someone – the part that has especially stunned social media users. According to a Daily Star report, a patient had died at the same hospital a day before.

NDTV cannot verify if the guard was talking to someone or not. Reddit users, meanwhile, pointed out that the guard could be playing a joke.

“Alright that’s pretty weird. Either the guard is playing a joke on the cameras or this is pretty hard to explain,” the user commented. “He knows his colleague is sitting in the basement watching the CCTV,” added another.

However, some users were scared after watching the footage. “This first episode was jaw dropping. The wheelchair scene blew my mind,” one of them commented.

The security guard is then seen pointing towards the doctor’s office and even escorting the ‘ghost patient’ there.

After the footage went viral on social media, the spokesperson for the care centre told local media that the door was faulty and kept opening multiple times.

“As it was broken, it opened by itself 28 times during the 10 hours between Thursday night and Friday early morning,” the Daily Star quoted the spokesperson as saying.

The spokesperson added that the security guard appears to be writing something on the clipboard paper, but no name is mentioned in the register.