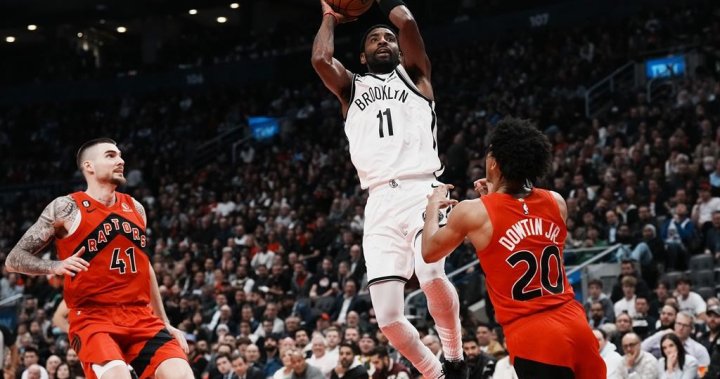 Kyrie Irving scored 29 points in his third game back from suspension, and the Brooklyn Nets cruised to a 112-98 win over the undermanned Raptors.

With numerous key players either ill or nursing injuries, Nurse said it was tough to sum up his team’s performance.

“Listen, let’s not get too crazy here. That’s a really good, motivated team with a lot of scorers and shooters and our guys aren’t feeling great,” said Toronto’s coach, who sounded like he wasn’t feeling so great either.

“A couple of our guys … are still coming off sickness. We will learn what we can learn and just try and regroup. We got a day off tomorrow and we’ll just hope guys start coming back.”

Gary Trent Jr. scored 19 points to lead the Raptors (9-9), who were missing both Fred VanVleet and Scottie Barnes, plus a half a dozen others. O.G. Anunoby finished with 15 points, while Thaddeus Young and Chris Boucher scored 12 apiece, and Jeff Dowtin Jr. and Juancho Hernangomez finished with 10 each.

The injuries and illnesses continue to mount for Toronto. News that VanVleet was out with a non-COVID illness caught reporters by surprise prior to Wednesday’s tipoff. Trent Jr. and Boucher missed Saturday’s loss at Atlanta with illness.

And then there’s the injuries. Barnes (knee sprain) and Dalano Banton (ankle sprain) sat out the game. Also missing were all-star forward Pascal Siakam, Precious Achiuwa, and Otto Porter Jr., who’ve all been sidelined by injuries, leaving the Raptors with nine players versus Brooklyn.

“The guys who did get to play, it should help them for the next time after not having played for a bit … get some of that out of them, get their legs underneath them, get some conditioning back,” Nurse said.

The beleaguered Raptors made a game of it for the first half, and trailed by just a point at the break, but ran out of gas against a Nets team at full strength.

The Nets led 91-76 to start the fourth quarter, and when Irving’s 26-footer dropped with 4:42 to play, Brooklyn went up by 20 and hundreds of fans zipped on their coats and headed for the exit.

“That’s what we want him to do,” Ben Simmons said of Irving. “Just be himself, have that confidence to come out and take those shots and be who he is. He’s an incredible player, incredible teammate.”

Irving was booed during team introductions. The embattled guard had served an eight-game suspension for posting a link to a documentary with antisemitic material.

The Nets raced out to an early 12-point lead on a cutting dunk by Durant, and stretched it to 15 points on Edmond Sumner’s running reverse layup with 47 seconds left in the first quarter. The Nets led 38-26 to start the second.

Toronto opened the second quarter with a 13-0 run, taking a one-point lead when Young scored on a putback of Trent’s missed jump shot. The Nets went ahead by seven before the Raptors closed the half with a 6-0 run, punctuated by Anunoby’s huge dunk over Kevin Durant. Brooklyn took a 52-51 lead into the halftime break.

The Nets stretched their advantage to 17 points on Claxton’s dunk midway through the third quarter.

The Toronto Argonauts were feted with a standing ovation when they took centre court with the Grey Cup. The Argos upset the Winnipeg Blue Bombers 24-23 in a thrilling 109th Grey Cup on Sunday. Canada’s women’s basketball team was also at the game.

Drake turned a few heads sitting courtside in a furry cream-coloured coat that featured two teddy bears sewn into the front. Longtime broadcaster Jack Armstrong wore the coat for part of the game, undoubtedly eliciting some chuckles from viewers.

The Raptors host the Dallas Mavericks on Saturday and the Cleveland Cavaliers on Monday.

This report by The Canadian Press was first published Nov. 23, 2022.