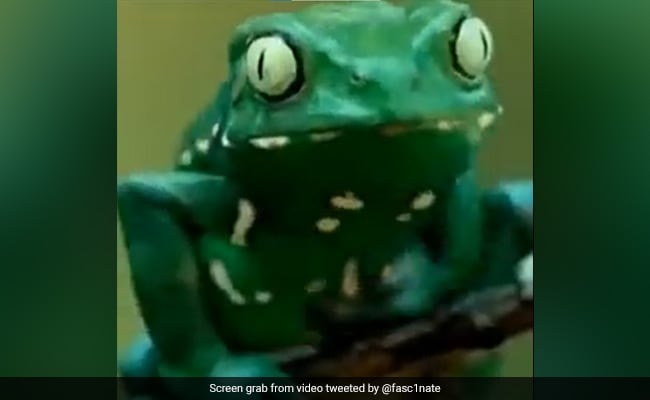 This species of frog can tough it out in very high temperatures and hang out in direct sunlight.

A fascinating video of a frog has surfaced on the internet. The video shows a South American giant monkey frog rubbing itself with its forelimbs and hindlimbs to secrete body wax.

The South American giant monkey frog massages its skin to secrete a wax that stops it from drying in the sun.pic.twitter.com/vfbaZN27Io

The video has amassed more than 2.4 million views on Twitter. Several users on the social media platform expressed their amazement. A user wrote, “The wax is also an incredibly powerful medicine for humans, Amazonian tribes call it “The Vaccine of the Forest”. It is known as Kambo.”

Another user wrote, “I imagine this is what a hallucinogenic toad looks like after some time after you’ve picked one up, licked it, set it back down, and then decided to sit down next to it and stare at it like it’s some kind of psychedelic Kermit the Frog.”

This species of frog is also known as Phyllomedusa sauvagii. It belongs to the Phyllomedusidae family of frogs. The amphibian spends most of its life in the treetops, and it produces a waxy substance that covers its skin with a protective layer, according to World Wild Life.

This species of frog can tough it out in very high temperatures and hang out in direct sunlight.

According to Earth Touch News Network, the glands behind the frogs’ eyes produce a thick waxy secretion, which is then rubbed all over. The wax seals in moisture and helps keep heat out, giving the frogs the highest temperature tolerance of any free-ranging amphibian.