The world’s most expensive restaurant experience comes to Dubai 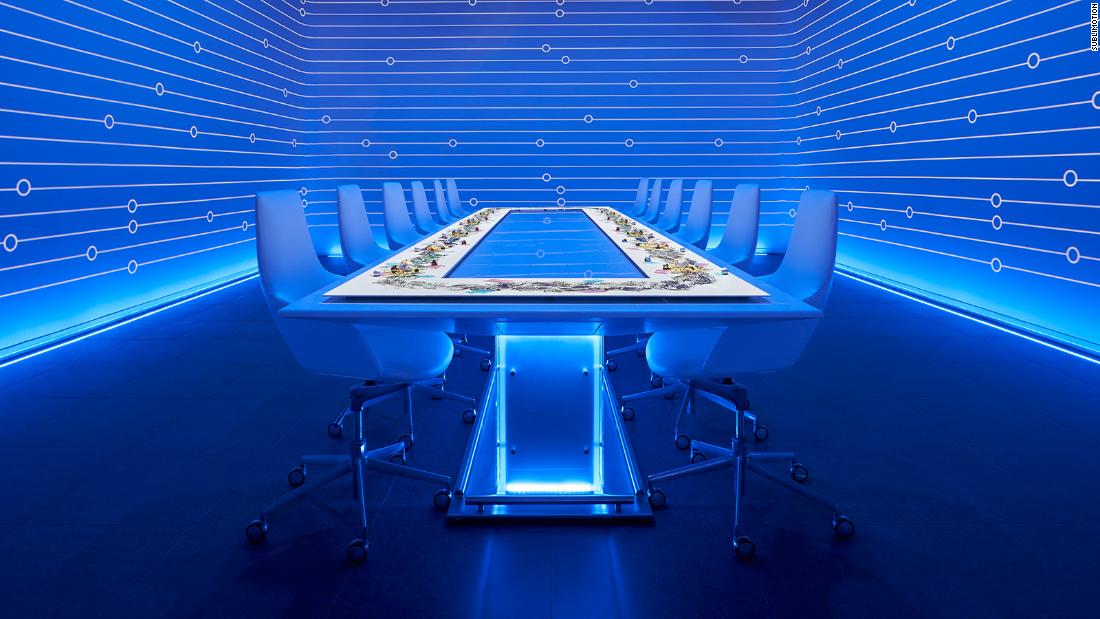 Editor’s Note — This CNN Travel series is, or was, sponsored by the country it highlights. CNN retains full editorial control over subject matter, reporting and frequency of the articles and videos within the sponsorship, in compliance with our policy.

(CNN) — Dubai is known around the world as a center for fabulous indulgence and ambitious innovation and its restaurant scene is no different. A seemingly incessant wave of new openings has confirmed its place as one of the planet’s finest places to dine out.

Whether you’re looking for a hip fast food chain straight out of California, or the world’s most expensive restaurant experience, on tour from Ibiza, there are sensational options at every price point.

While there are dozens of new openings to choose from every month, here are 11 recently opened spots that are worth checking out.

With financial backers including celebrity fans Drake and Samuel L. Jackson, Dave’s Hot Chicken has had a meteoric rise since opening in an East Hollywood parking lot just five years ago.

Its latest launch comes at The Walk in Jumeirah Beach Residence, where long lines have already attested to the draw of their poultry. The chicken is flavored with a range of signature spices which goes from No Spice to The Reaper — clearly not for the faint-hearted, and which requires you to sign a disclaimer.

Taste and technique is everything and Chef Dave Kopushyan brings an impressive resume, having trained at Thomas Keller’s famed French Laundry restaurant, which has held the maximum three Michelin stars since 2007.

Alongside chicken tenders and sliders, Dave’s Hot Chicken’s fries, mac and cheese and kale slaw ensure that no one goes hungry.

Sara Aqel was born and raised in Jordan in a Palestinian family for whom food was everything. After culinary school she worked in famous kitchens around the world before taking on the role of global executive chef of Fi’lia, at the age of just 26, with responsibility for branches in Miami, the Bahamas, Paris — and Dubai. Based in the UAE, she now proudly runs the Middle East’s first restaurant with an all-female management team.

Having worked with superstar chef Massimo Bottura, her cuisine up on the 70th floor of SLS Dubai is Italian with Mediterranean influences, inspired by recipes handed down through generations of women. Indeed, even the wine list is 100% from female producers. Look out for seabass with a feta and herb crust, flawless pasta and decadent desserts, while the service team are reputed as one of the warmest in the city.

A brand new hotel opening, the W Dubai – Mina Seyahi sits on Barasti Beach and looks out over sleek yachts in the harbor and bay beyond. Its Ginger Moon restaurant brands itself as an “urban beach club” thanks to an expansive terrace and infinity pool that draws a crowd keen to find the perfect Instagram shot while kicking back in cabanas to DJ sets.

Amongst appetizers on the eclectic and international menu, marinated ceviche of red snapper or hamachi sit alongside beef tartare or creamy burrata with smoked peaches. For the main event, seafood is the biggest draw in fragrant bowls of mussels, crispy sea bass with tamarind or shallow fried squid with sweet chili dipping sauce.

Capri’s L’Olivio is on an extended pop-up at the Al Mahara in the Burj Al Arab.

Although the Al Mahara restaurant has been a fixture at Dubai’s legendary Burj Al Arab hotel for years, it has recently welcomed an extended pop-up from Chef Andrea Migliaccio from the two Michelin-starred restaurant L’Olivo at Capri Palace Jumeirah in southern Italy. This being Dubai and The Burj, Al Mahara’s setting is extraordinary, as diners are served surrounded by a large coral reef aquarium.

Whether choosing their tasting menu or dining à la carte, the dishes come straight from Capri, including their tagliolini al limone. Delicate strands of homemade pasta are scented with lemon, oyster leaf and topped with burrata cheese and a spoonful of sweet red shrimp. An entree of gilt-head fish is lifted by the classic Sicilian caponata sauce, famed for its sweet and sour balance, before an apricot sorbet and meringues wrap up the five courses by once again celebrating the finest Italian ingredients.

Demon Duck from Chef Alvin Leung is the latest addition to the extensive dining destinations at Caesars Palace Dubai. There’s no mistaking you’re in the right place as the walls are adorned with quirky depictions of ducks from photographer Mark Chung, while there are no prizes for guessing the star of the menu.

Leung’s slow-roasted Peking duck is a signature dish worthy of the name, thanks to an extensive, time-consuming process including brining, blanching, aging, and slow cooking before cooking quickly at high temperatures, all to ensure crispy skin and succulent meat. He serves it on bao buns scented with calamansi, a type of citrus, accompanied by “demon sauce,” but purists can choose to go for traditional pancakes, scallions, cucumber and hoisin sauce.

Orfali Bros has been awarded a Michelin Bib Gourmand for its great-value dishes.

Three Syrian brothers, Mohammad, Wassim and Omar Orfali. have created one of the hottest culinary tickets in town with this modern bistro celebrating their global food experiences. The open kitchen lets diners see Mohammad at work on dishes such as Guess What?, which combines lacto-fermented local tomatoes with cucumber, herbs, sourdough and feta, or Come with Me to Aleppo, a kebab with sour cherry, pine nuts and cinnamon.

Upstairs, Wassim and Omar work on picture-perfect pastries and desserts which have taken Instagram by storm. But there’s no question that the style is matched with substance, as Orfali Bros was given a Michelin Bib Gourmand (a value-for-money award) in Dubai’s inaugural guide, while they are also ranked 87th in an extension to the hotly debated World’s 50 Best Restaurants list.

Two Asian cuisines meet at Maya Bay, a restaurant which first opened in Monaco in 2005 and has now arrived in Dubai’s Jumeirah Al Naseem hotel with its mix of Thai and Japanese dishes. That translates into an extensive menu featuring everything from sushi and sashimi to curries and salads, Japanese mochi sweets to Thai pandan cake.

British Head Chef Shane Macneill overseas the team who serve up classics and new creations alike, some with optional extra decadence, such as the uramaki sushi roll with wagyu and caviar. Signatures include black cod in sweet miso sauce cooked over charcoal, or the versatile stir-fried noodles favorite, Pad Thai. On the drinks front, cocktails have a tropical vibe while sakes and teas are other pairing options.

With a deck looking up to the jaw-dropping Burj Khalifa (then again, as the world’s tallest building, everything in Dubai looks up to it) Inti’s terrace is set to be a big draw, especially in the more temperate late fall and winter months. A restaurant focusing on Nikkei cuisine — Peruvian-Japanese fusion — it also features live entertainment from Latin dancers and DJs.

Inti is named for the word for sun in Quechua, the language spoken by the Incas that is still spoken today in Peru, Ecuador and Bolivia. Start with eggplant cooked tempura-style, gyoza dumplings with black cod, or maybe their wide selection of ceviches and salads. Alongside steaks and seafood grilled in the Josper oven, their anticuchos skewers are also popular, with marinated chicken, jumbo shrimp or corn amongst the options.

It may be just a six-month residency that ends in May 2023, but the multi-sensory dining pop-up Sublimotion — usually based in Ibiza — is the 12-seat dinner that everyone wants to reserve. Well, everyone with seriously deep pockets, as this is known as the world’s most expensive restaurant: dinner runs to a scarcely believable 5,000 Dirhams ($1,361) per person. But hey, unlimited premium beverages are included.

What’s on offer is a tasting menu of up to 20 interactive courses of true culinary theater. Projected imagery and music combine to ensure that diners should only expect the unexpected, as the dining room transforms into settings including the ocean and the forest, while VR headsets also take eating in wholly unexpected new directions.

Unexpected and surreal theatrical entertainment is one feature of the menu at TABŪ on the 23rd floor of The St. Regis Downtown. Sumo wrestlers, human “wolves,” magicians and geishas all make appearances throughout the evening across different stages, mingling with diners to the sounds of the resident DJ.

On the food front, TABŪ’s Executive Chef Roberto Segura oversees a Japanese-Peruvian menu that includes sushi and ceviches, salads and Ishiyaki stone bowls, as well as a range of steaks.

Tuna tartare in sesame cones or sea urchin with caviar are among small bites to start, before more substantial entrees like a clay pot of Chilean seabass, king crab leg with yuzu or gently braised beef short rib. They also stress their vegan-friendly credentials, including in desserts.

Finally to Avatāra, a fully vegetarian fine dining experience that celebrates the diverse cuisines of northeast India. Chef Rahul Rana comes from Rishikesh in the foothills of the Himalayas and serves dishes that reflect his background and experience, while also attempting to change perceptions of vegetarian food.

So a steamed dumpling known as a momo is filled with jackfruit, giving it a meaty texture similar to pulled pork, accompanied by thukpa, noodle soup flavored with lemongrass. Another dish traditionally served during festive feasts is fried lentil fritters served with fermented carrot. Coconut kheer — a type of fragrant pudding — is a light way to end a tasting menu with a strong emphasis on health.