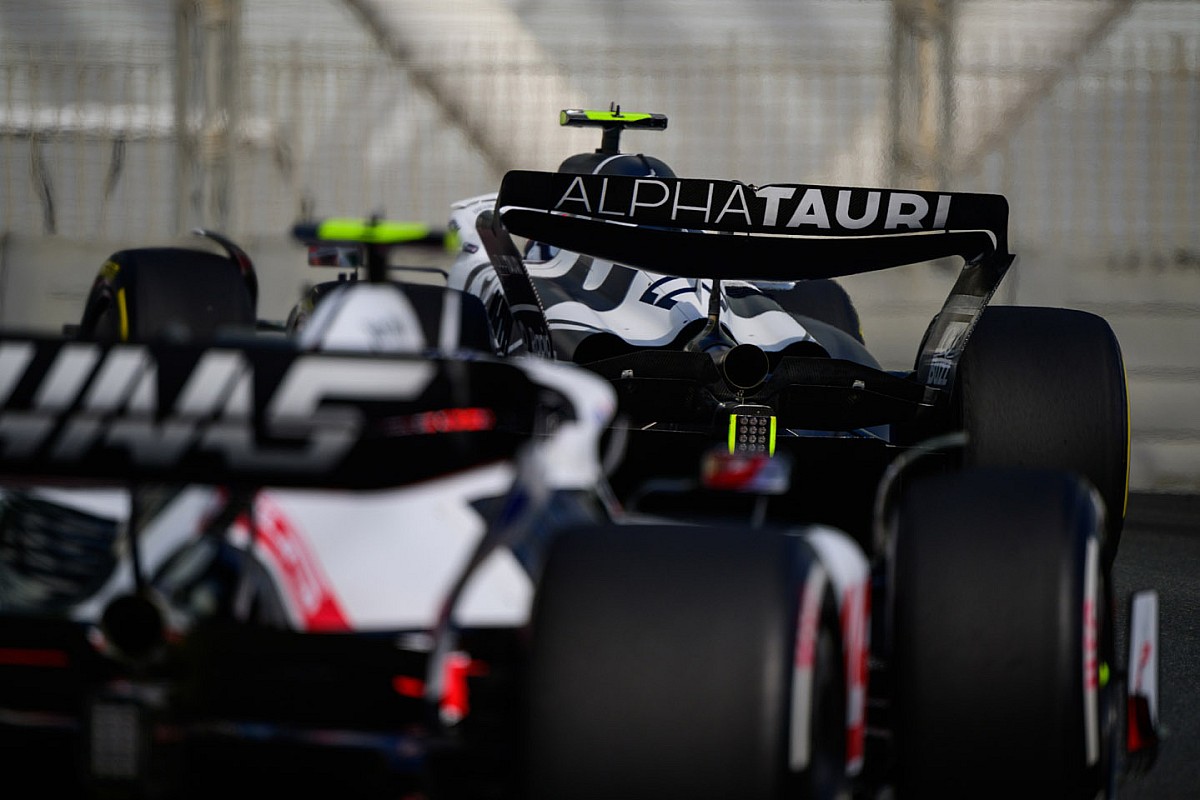 The session will also be the first proper test of a new hard compound that falls between the current C1 and C2.

All 10 teams are running two cars apiece, with one for race drivers, and one reserved for rookie drivers who have made fewer than two starts.

Only the 2023 tyres will be used, which means the youngsters – some of whom graduate to race seats themselves next season – will be expected to play an important role.

The teams took part in 2023 tyre testing in FP2 in both Austin and Mexico City. However, those sessions were ‘blind’0, and while some drivers ran the same tyres that will be used in Abu Dhabi, others used experimental versions that didn’t make the final cut.

For Abu Dhabi, the tyres will be prepared as agreed with the teams and the FIA for 2023, with two hours of pre-heating at 70ºC.

The tyre allocations between the race drivers and rookies are different, with the former getting more sets and thus potentially running more mileage over the day. The allocations are as follows:

“The allocation was decided together with the FIA,” said Pirelli chief engineer Simone Berra when asked by Motorsport.com about the choices.

“So we will bring just one set of the hardest range, C1 and C2, and some sets of C3, C4 and C5, obviously, because they are more suitable for this circuit.

“The idea is that the young drivers can work more on the softer range, and just protect their confidence with the car.”

For 2023 the five existing slick compounds are unchanged from this year, and the key novelty for next season is the construction.

“The 2023 specification is different in terms of structure on both front and rear axle, mainly on the front,” said Berra. “We worked a lot on the structure to improve the integrity of the front axle, and to decrease a little bit the front axle pressure prescriptions from what we have now at the moment.”

Berra confirmed that there will be an extra sixth compound choice in 2023, with the current C1 becoming the C0, and a new C1 introduced to fill a perceived gap between the current C1 and C2.

The new tyre was run by some drivers in Austin.

“We have a new version of the C1. So the C1 is no more the current C1, it’s a new one that should provide more grip compared to the old one, that was less grippy. We received feedback that the grip was lacking a little bit on the C1.

“The current C1 will become for next year the C0. So, next year we will have six compounds, C0 that is the current C1, the new C1, and then the others that remain exactly the same compound on the new structure.

“The C0 will be used at the most stressful circuits, which will probably be Silverstone, Suzuka and Qatar for next year.”

Regarding the decision to move to 70ºC heating from the planned 50ºC, Berra said: “We focused a lot on the structure, because it was the main target for the development of this year. And we didn’t develop many different compounds, and so that’s we didn’t achieve the target of the 50 degrees.

“So for us, asking the drivers for their feedback, asking FIA what was then sort of saving for the energy usage, there was not much saving in terms of blanket energy, it was decided that the best solution was to keep the 70 degrees.”

Pirelli will also do some running with 2022 cars in the winter, before the 2023 machines are ready.

The focus will be on wet running at Paul Ricard and Fiorano, with slick work – for 2024 – to be undertaken at Portimao. Ferrari, Aston Martin and AlphaTauri have been confirmed as taking part thus far, while Mercedes has expressed an interest in helping out.

“There will be some tests, not with all the teams,” said Berra. “We asked the availability to them, and some of them replied.

“We will work mainly on the intermediate and wets, because for us, it’s the best period of the test in cold temperatures and in representative conditions. And then we will have a couple of tests for the slicks for the new specification for 2024.”