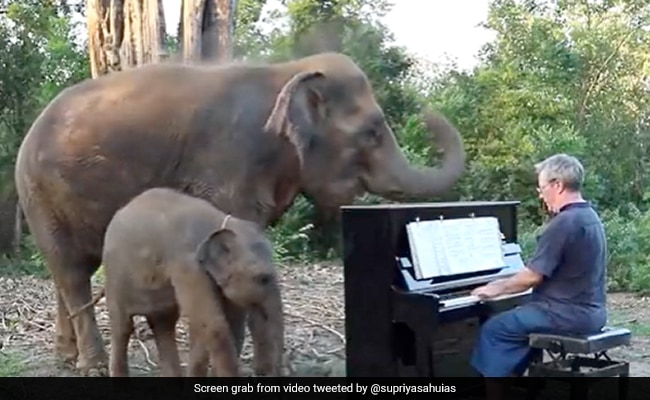 The video has been captured in Thailand

Elephants are intelligent and emotional animals, who seem to have a similar affinity to listening to music as humans do. There have been several videos on the internet which have recorded their happy reaction while listening to music. A similar video has surfaced on Twitter showing an artist playing the piano for a mother and baby elephant.

The video was shared on Twitter by Indian Administrative Services (IAS) officer Supriya Sahu on November 20. She captioned the video as, ”Piano for mother and baby elephant,” and credited the video to Paul Barton. As per Ms Sahu’s caption, the video has been captured in Thailand.

The video opens to show Mr Barton sitting in a forested area, playing some soothing music on a black piano. Meanwhile, the mama elephant and her baby stand in front of the man and patiently enjoy his performance. The gentle giants also move their trunks, to display their appreciation for the musical performance.

According to his Facebook page, Mr Barton originally hails from the United Kingdom but moved to Thailand 26 years ago, where he performs for blind and handicapped elephants. Mr Barton had originally posted this video back in 2019 on his YouTube channel, which has resurfaced on the internet again, thanks to the IAS officer’s tweet. Back in 2018,  he told ABC, “It seems worthwhile to play piano music to elephants if they enjoy it, elephants that have had stressful lives.”

Since being shared, the video has received close to 6000 views and several shares and comments. Social media users loved the sweet video and dropped heart emojis in the comment section. One user wrote, ” Such a lively audience….worth performing.” Another commented, ” Wow!!! So nice..”