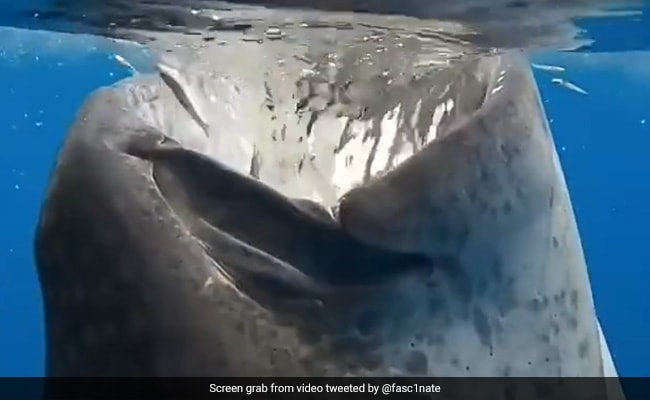 Whale sharks are known to be the largest living non-mammalian vertebrates.

Whale sharks are among the world’s largest fish, measuring upto 18 metres long. But when it comes to gulping down fish, they can suspend themselves in upright position despite having a high body density. A video going viral on social media shows exactly this – a whale shark swallowing several small fish underwater as quick snack. The video was first posted on Twitter by Steve Stewart-Williams in August and re-shared by a page called Fascinating. It has amassed 11 million views and more than 5,500 retweets.

The short clip shows the whale shark almost coming to the surface with its huge mouth wide open. In one go, it gulps down dozens of fish swimming above.

A whale shark has a quick snackpic.twitter.com/t9kahZe9kG

The video has been captioned, “A whale shark has a quick snack.” It has stunned social media users, who posted thousands of comments.

“Imagine they were swimming, minding their business on a Monday morning and GULP, you in a whales intestines and you lose your subscription to life,” commented one user.

Some users joked that the clip reminds them of gulping down their favourite snack. “This is me, but with Jaffa cakes,” tweeted one user.

Whale sharks are known to be the largest living non-mammalian vertebrates. The slow moving fish swims close to the water surface.

In India, whale sharks are protected under the Wildlife Protection Act. They are also categorised as an endangered species in the International Union for Conservation of Nature.

Will Shadow Of 2002 Riots Loom On Gujarat Polls?