Soon, An Edible Drone To Provide Life-Saving Food In Emergencies 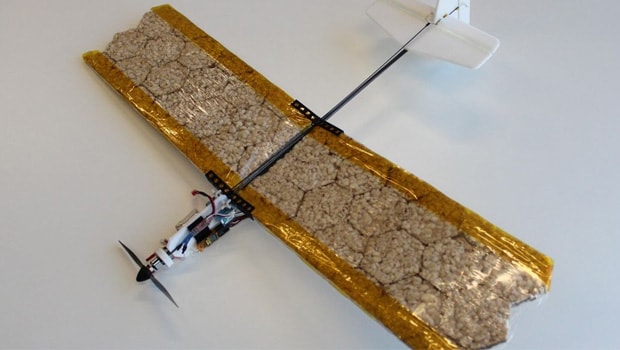 Aerial systems like drones have been very useful in crisis situations for unmanned transportation of food and water. A drone is a small aerial vehicle that can carry only 10-30 % of their own mass as payload. To overcome this limitation, a team of researchers at the Swiss Federal Institute of Technology, Lausanne (EPFL) has developed a prototype of an edible drone. The drone has fixed edible wings, increasing its food-carrying mass ratio to 50%. The partially edible airport is a part of project ‘RoboFood’, which is dedicated to inventing edible robots for humans as well as animals.

A paper on the invention of edible drone was presented at the IEEE/RSJ International Conference on Intelligent Robots and Systems (IROS) conference in Kyoto recently. The paper is titled, “Towards edible drones for rescue missions: design and flight of nutritional wings.”

What Is The Edible Drone Made Of:

Now this is a fascinating information. After thorough research, the researchers decided to make the wings of the drone with puffy rice cakes glued together with gelatin! As commercial rice cakes come in a round shape, they are laser cut into hexagons to make them easier to stick together to make the wings. After the gelatin dries up, the wing is wrapped in plastic and tape to make sure it doesn’t break down in wet or humid environments.

The edible drone has a wingspan of 678 mm and can provide 300 kcal of nutrition through the rice cakes and gelatin. The edible wing was fabricated by gluing main structural materials with edible adhesive, which provides a small amount of nutrients – 200 kcal per 100 g.

(Also Read: This Robot Can Peel A Banana Without Squishing It, And Twitter Has Questions)

Rice cakes are made with puffed rice grains.

Why Rice Cakes For Edible Drones:

About Neha GroverLove for reading roused her writing instincts. Neha is guilty of having a deep-set fixation with anything caffeinated. When she is not pouring out her nest of thoughts onto the screen, you can see her reading while sipping on coffee.