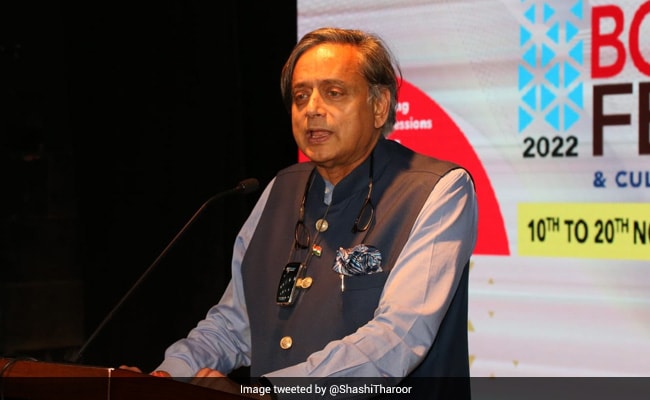 Since being shared the post has amassed over 1,800 likes and 148 retweets.

Congress leader Shashi Tharoor is quite active on his social media and knows how to keep his followers entertained. With the ongoing FIFA World Cup 2022 in Qatar, the Congress leader took to Twitter to share a meme comparing the balancing skills of Indian women with football legend Lionel Messi.

In the post, one can witness Messi balancing a football on his head while on the other side a “mausi” is seen carrying on her head five earthen pots, mostly used to fill drinking water. What is more interesting is the fact that the woman is also carrying four pots in her hands. The politician captioned the post as, “Hats (& any other headgear) off to the intrepid Indian woman!”

Hats (& any other headgear) off to the intrepid Indian woman! pic.twitter.com/PaNNSI1zg6

Since being shared the post has amassed over 1,800 likes and 148 retweets. One user wrote, “Unbelievable.”

“Women are even greater jugglers than any footballer as they juggle daily through work, cooking, managing the house, cleaning, caring and alot more things,” said another user.

“While not undermining Messi’s skills, the smiling woman is sheer poetry in motion… Some people just see the poverty ,as if that’s something to be shameful about,” commented another person.

A fourth user said, “Fearless bhi likh sakte the. Why you make people to refer to dictionary when reading your tweet.”

One user also helped others who were wondering what the “intrepid” meant. He wrote, “intrepid meaning: characterized by resolute fearlessness, fortitude, and endurance.”

“Sir, Namaste! I know that you a are a bright star in the literary sky. I began grasping that you are also a person who tries to make us chuckle a while. It is so sweet of you!,” said another user.

A few days ago, Mr Tharoor shared a picture of an old 1919 cartoon predicting how technology would impact human lives in the coming years. Interestingly, it resembles where we as humans have reached with technological advancements and its deep impacts on our lives. Many internet users were left baffled looking at the cartoonist’s foresight.

Is Varun Dhawan’s Sense Of Smell As Good As A Bhediya? He Takes The Smell Test