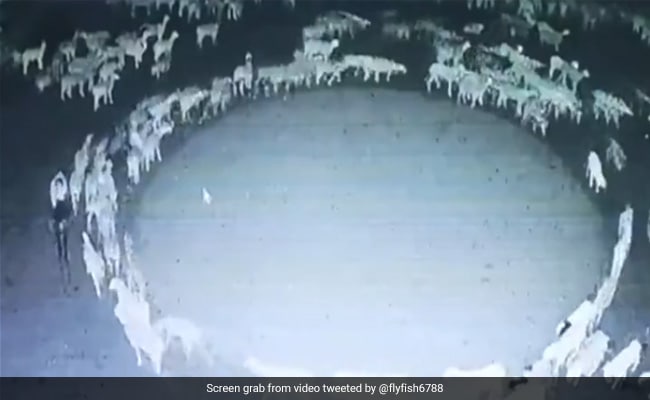 Chinese media reported that the sheep were walking in circle for 12 days.

A scientist claimed to have solved the mystery behind an eerie footage of a huge flock of sheep walking in a circle for 12 straight days in China. The video, posted on Twitter earlier this month, had baffled people across the globe. The footage was posted by Chinese state-run outlet People’s Daily and shows dozens of sheep walking clockwise in a nearly perfect circle on a farm in Inner Mongolia. Most of the animals are seen engaging in the same behaviour.

Explaining this bizarre behaviour, Matt Bell, a professor and director at the Department of Agriculture at Hartpury University, in Gloucester, England, told Newsweek, “It looks like the sheep are in the pen for long periods, and this might lead to stereotypic behavior, with the repeated circling due to frustration about being in the pen and limited [as to where they can go]. This is not good. Then the other sheep join as they are flock animals and bond or join their friends.”

Sheep exhibit flock mentality, which mean they move along with the herd, protecting an individual animal from predators.

But the sheep in China had been moving in a circle since November 4, according to People’s Daily report. There is no information available to know whether they stopped to eat or drink or are still moving.

The owner of the farm, identified as Ms Miao by UK-based Metro, told local news outlets that there were only a few sheep displaying the behaviour once, but gradually the entire flock started moving around in a circle.

The sheep that Ms Miao own are kept in 34 pens, but she said that only one flock of sheep in one pen have been acting strangely.

Horrors Against Women Continue Across India