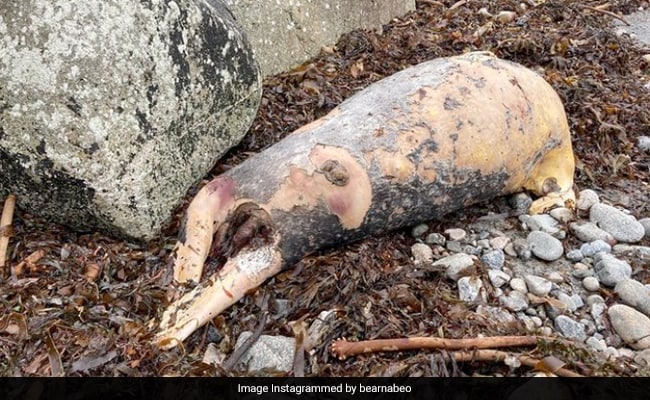 Many said that the creature has pig-like features

A photo of a mysterious sea creature lying ashore on a beach in Ireland has left the internet baffled. The unknown animal’s body was discovered on the shores of Barna Pier in Galway, Ireland, on November 12, making internet users wonder what it was.

An Instagram account called BearnaBeo shared the picture of the strange creature and wrote, “Some sort of sea creature washed up at Bearna Pier beach over the last few windy days. Sea Lion? Seal?”

The post has received a flurry of reactions, with many saying that the creature has pig-like features. Others thought that it resembles a “beheaded seal”.

One user commented, “Looks like a grey seal? I also saw what appeared to be a sheep’s head? But maybe it was part of this animal as his head is missing? Also saw a Maire Fhada or Grey Heron on the same pathway. Strangely enough, its wings were intact but its head was missing!”

Another reiterated the same and said, “I would guess beheaded seal.” People reasoned that is in fact a seal, because of the fact that a seal’s front flippers are quite short.

According to Seal Rescue Ireland, there are two species of seals that are native to Irish waters: The Grey Seal and the Harbour (or Common) Seal. Both the seals, known as True Seals, lack an external ear and simply have an opening on either side of the head.

Earlier, an enormous dead whale was found washed up in Ireland’s North Mayo. The large mammal became stranded on Shraigh beach in Belmullet, according to a report by GalwayBeo. One user commented, “The whale came in at Doolough shore first and was carried onto Shraigh beach directly across. It’s a female of 2 or 3 years old and 11 metres long. “Suspicions are it swallowed plastic at sea.”