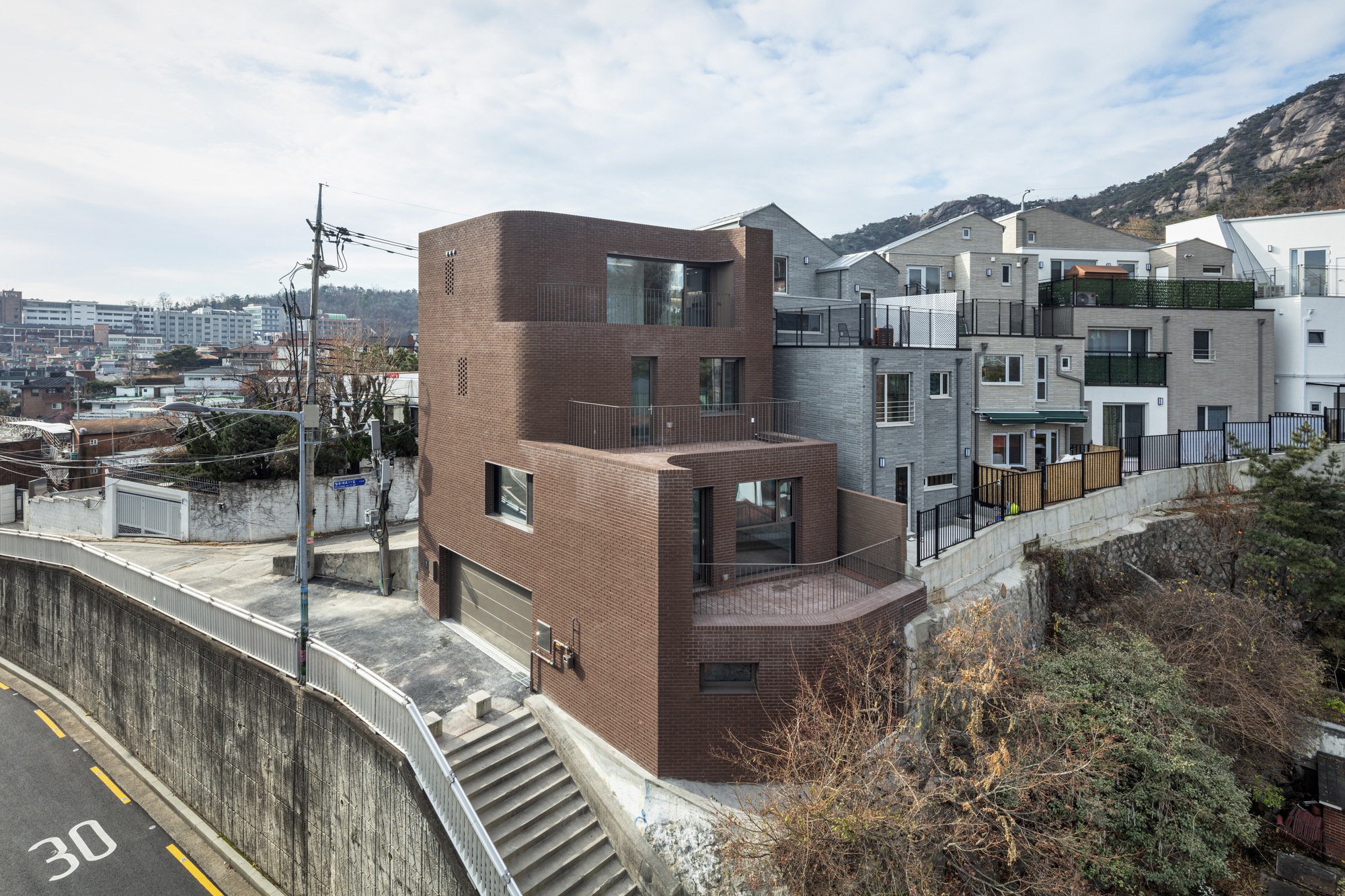 Text description provided by the architects. Ogindan Dandan is on the left side of Gyeongbokgung Palace in Seochon. Cafes and restaurants can be found one after another along the street from Gyeongbokgung Station, but the area is quiet because it is somewhat far from the main boulevard. The site where Ogindan Dandan is located sits at the end of the mountain ridge to the west. To be exact, the road next to it was created at a right angle to the mountain range, and the land next to the road was used to build the last house in the village that was formed all the way to the bottom of the mountain. It would be appropriate to say that the stature of the place can be appreciated from the east, west, and south sides.

If you look from the three sides, other than the west side, the house is located at the beginning point of the village on the hill. The relatively gentle slope in the south curves to the west as it meets the land and leads to the top of the hill. When viewed from the east side, the site sits above the retaining wall next to the road, and it is 8 meters apart from the house to the north. Due to these characteristics, Namsan Mountain can be seen far away in the south. Bukaksan Mountain and Cheong Wa Dae can be seen simultaneously to the north. The landscape surrounding the site and the environmental characteristics around the building had an integral influence on the appearance of the house and the planning of each space inside it.

Ogindan Dandan is right next to the road to the south. The yard is on the opposite side of the solid-looking southern part of the building. Additionally, balconies were planned for the second and third floors above the yard. The client requested a house with spaces in which families could live independently on each floor. The combination of rooms and three external areas forms an independent space with each floor having a different shape. As a result, the shape of the house as a whole is formed by a large stylobate and stacked layers.

The initial design was to have a large window in the direction of the patio on each floor so that everything could be seen, from the balcony indoors to the scenery of Bukaksan Mountain far away. In this way, the interior extends to the outer part of the house, making the interior appear to be more expansive. In the study room, where retired parents could spend most of their time, the changing scenery outside the window throughout the day would be expected to fill the space with color. To protect residents’ privacy from the surrounding environmental factors, the windows were carefully positioned except for the ones on the northern part of the building, blocking people’s views from surrounding areas through an extended volume of walls.

Exposed concrete walls in the living room on the first floor extend along the stairwell to the living room’s ceiling on the third floor, designed to connect each floor independently.

Slightly widened door (살짝 넓힌 문) – The house is directly adjacent to the road on the south side, and the main entrance is located in the center of the building. The door was designed to be as tall as two floors and was made this way so that one’s sense of physical distance would be influenced by taking psychological and visual elements into account.

The wall on the right side of the porch stands vertically, and the wall’s surface on the left is a smooth curve. However, all of the bricks on the curved surface starting from the ground exhibit different angles and positions that are integrated into the two wall surfaces in a right-angled direction as they approach the ceiling surface of the entrance.

The Slightly widened door and the small flowerbed along the road, which could be cultivated according to the client’s preferences, were designed with the calming and solid surface of the house in mind, and the entrance effectively mouthing a relaxing smile towards the road beside the building.