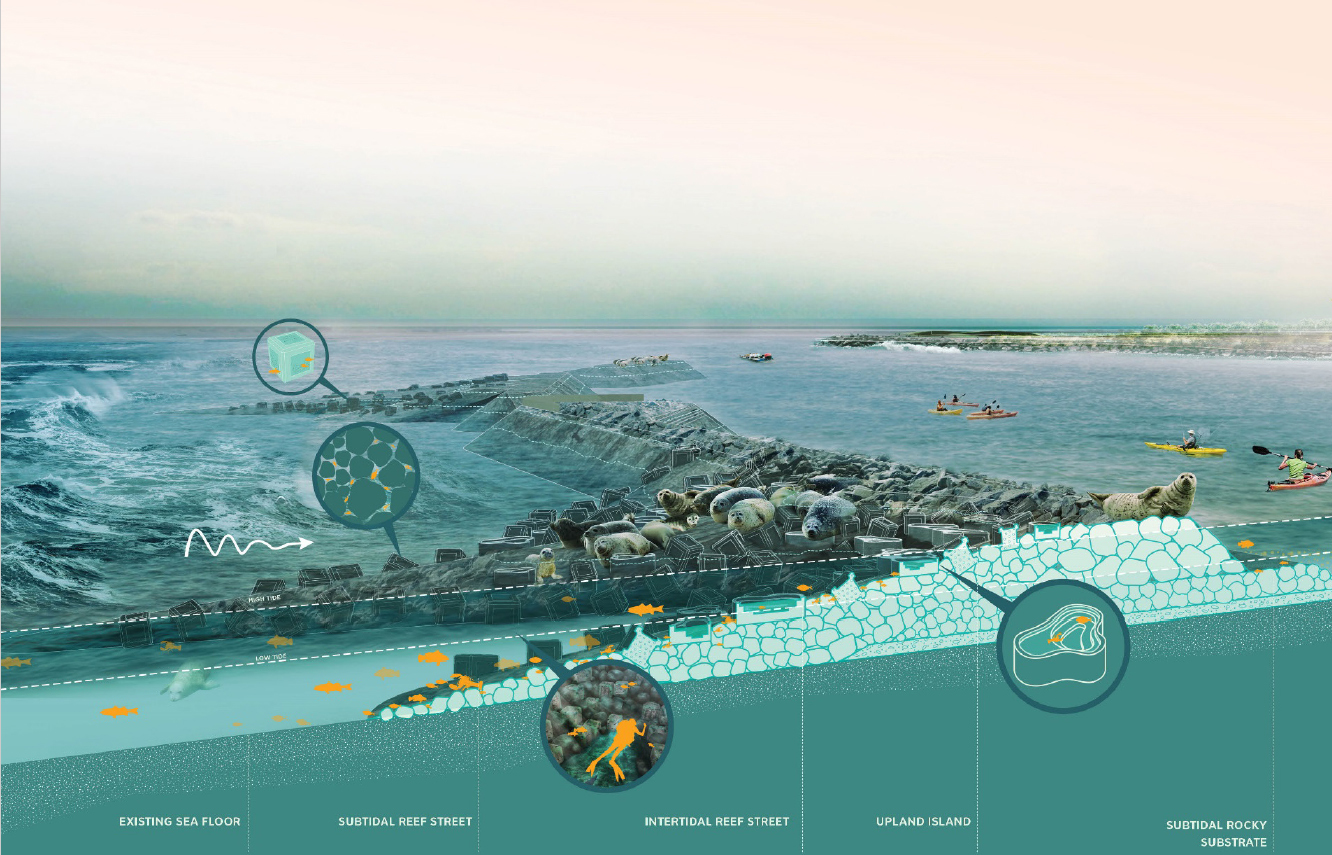 “Superstorm Sandy in 2012 was a wake-up call for NYC and made the city realize it needed to better prepare for climate change,” said Adrian Smith, FASLA, vice president at ASLA and team leader of Staten Island capital projects with NYC Parks. Due to storm surges from Sandy, “several people in Staten Island perished, and millions in property damage were sustained.”

On the 10th anniversary of Sandy, Smith, along with Pippa Brashear, ASLA, principal at SCAPE, and Donna Walcavage, FASLA, principal at Stantec, explained how designing with nature can lead to more resilient shoreline communities. During Climate Week NYC, they walked an online crowd of hundreds through two interconnected projects on the southwestern end of the island: Living Breakwaters and its companion on land — the Tottenville Shoreline Protection Project.

Sandy impacted 13 states along the East coast, causing the death of more than 100 people, power outages for 8.5 million, more than $70 billion in damages, and the destruction of 650,000 homes. In response, President Obama initiated a task force, which led to the creation of Rebuild by Design, a novel program at the Department of Housing and Urban Development (HUD).

Then HUD Secretary Shaun Donovan — who has trained as an architect and is married to Liza Gilbert, ASLA, a landscape architect — initiated the program to plan and design better climate resilience solutions.

With numerous state and local government, non-profit, and philanthropic partners, the first Rebuild by Design competition funded seven ambitious projects throughout the Tri-state area. One of those projects is Living Breakwaters, off the coast of Tottenville, which received $60 million in federal grants, along with significant state and city support.

“Donovan created the opportunity to do things differently, allowing interdisciplinary design teams to take a broad perspective. It really takes a village. Rebuild by Design has allowed landscape architects to shine,” Brashear said.

New York City has more than 500 miles of shoreline, and its harbor is deeply intertwined with the city’s economy and culture. But with climate change, the city’s shoreline and low-lying communities are increasingly exposed to storm surges and sea level rise.

These coastal communities are in both highly dense urban areas like Manhattan and inner Brooklyn and in suburban or even rural areas in Staten Island and the far reaches of the outer boroughs. In communities with natural shorelines, like many in Staten Island, erosion has caused a loss of one to three feet of coastline each year.

Living Breakwaters, which is now under construction, is designed to reduce coastal flood risks and erosion while improving habitat for wildlife and increasing social resilience to future climate impacts.

It’s not designed to keep floodwaters out but to create a necklace of breakwaters combined with a layered system of adaptation on shore. – Brashear.

SCAPE worked with coastal and structural engineers to develop a series of breakwater models. They found that just creating digital models wasn’t enough and tested physical models in a “giant wave tank” in Canada to refine the placement of elements in the water.

The breakwaters are comprised of 600 bio-enhancing “armor blocks” made of porous concrete produced by the company ECOncrete. They are set in the water at different elevations. Lower-crested breakwaters will help with erosion while the higher ones will help with wave attenuation.

The breakwaters were custom designed to include “niches and crevices” that introduce habitat complexity, creating space for a range of targeted species, including juvenile fish, oysters, and other shellfish. Brashear argued that their clients are also the wildlife of the harbor. Already, Stanley the seal has made the breakwaters a chill-out spot.

The armor blocks will create tidal pools and “reef streets,” which are underwater canyons where oysters will be installed. The careful arrangement of elements enable wildlife to thrive without being overtaken by accumulating sediment.

Back on shore, SCAPE engaged local residents to create a dialogue around the design. “Our goal was to foster awareness, help the community cope with flood risk, and engage in stewardship.”

“We also tried to steer away from formal meetings.” Instead the firm engaged residents and school children in new and often fun ways.

Tottenville was once called “the town oysters built.” The bay was so intensively harvested it was “like a farm.” SCAPE found that “oysters are the charismatic bivalve of NYC. The idea of the oyster reefs resonated with people.”

So educational programs with partners brought oysters and their history in the community to life, which helped reconnect the community to its shoreline. “This project is not just about breakwaters but a layered approach to reduce risk and fostering a local culture of resilience.”

The Tottenville Shoreline Protection Project runs parallel to the Living Breakwaters on shore and extends further along the coast. A result of federal, state, and local government investment, it’s one of the key layers in the nature-based protection plan Brashear described.

During both Hurricane Ida and Superstorm Sandy, the surge of coastal waters flooded deeper inland, causing immense property damage, Walcavage said. The Line of Moderate Wave Action (LIMWA) is a measure the Federal Emergency Management Agency (FEMA) uses to indicate the inland coastal zones that can be reached by 1.5 to 3-feet-high waves. In Tottenville, more properties have fallen inside the LIMWA in the past few decades, and the owners faces much higher dangers and insurance rates.

One goal of the Shoreline Protection Project is to move the LIMWA back so more homes are out of the highest risk zone. To accomplish this, Stantec designed a series of “sand-capped dunes with stone cores,” Walcavage said. “These look more like natural shore. The stone core will protect against wave attentuation even if the beach is gone.”

Walcavage said getting the architecture of the dunes right was tricky. The dune infrastructure is responsive to different water and coastal conditions. Some areas are designed for wave attentuation while others guard against erosion and sea level rise. They are wider in areas to ensure the sand’s correct “angle of repose.”

And the team realized that the entire shoreline protection system had to be extended because otherwise the “water would just go around it” and find another way inland.

Beyond the new dunes, earthen berms will also be built in a series of restored wetlands, marshlands, and forested areas, which will double as flood water containment areas and public parkland. A key part of the project is safe but also beautiful pathways that improve access to these amenities.

When concerns are raised about the costs of these twinned projects, which together exceed $100 million, it’s important to understand these landscapes are “about both coastal risk reduction and ecological restoration,” Brashear said. And also, “people here in Tottenville are not ready to leave.”

Landscape architects, working together across public and private practice, want to reduce this community’s risk and send a message that storm surges and sea level rise don’t necessarily need to result in the loss of life, property, and public space. Even amid a changing climate and uncertain future, quality of life in shoreline communities can be improved through greater investment.

This article was originally published on The Dirt.