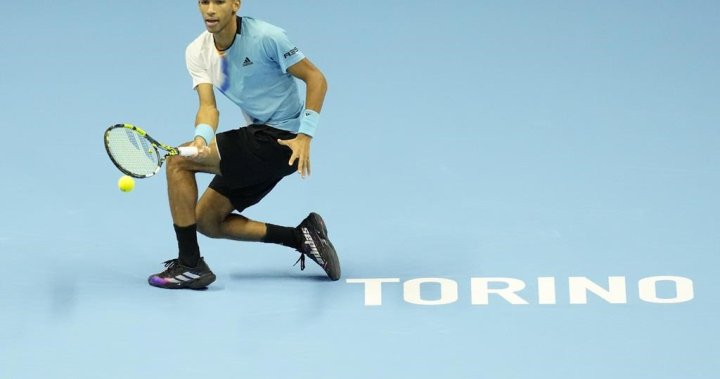 Canada’s Félix Auger-Aliassime scored a 6-3, 6-4 win over top-seeded Rafael Nadal in round-robin play at the ATP Finals on Tuesday.

Auger-Aliassime, seeded fifth in the season-ending men’s championship, won 81 per cent of his first serve points and delivered 15 aces

Nadal, meanwhile, falls to 0-2 with one match remaining in pool play.

Auger-Aliassime will next meet eighth-seeded American Taylor Fritz, who was set to meet Ruud later Tuesday.

Nadal will be eliminated from the event if Fritz falls to the 23-year-old Norwegian.

“I’m one win, one loss now. If I can get two wins, hopefully I can get through, so let’s see how it goes,” Auger-Aliassime said. “They will play it out tonight and I will be ready for Taylor in two days. It won’t be easy. He has been playing really good this year and these conditions are perfect for him.”

It was the Montreal native’s first career win over the 22-time Grand Slam champion. Nadal had beaten Auger-Aliassime twice previously, including a gruelling five-set decision at the French Open in May.

Auger-Aliassime earned his way into the elite season-ending event in Turin, Italy, thanks to an impressive 16-match win streak, which led to wins in three of the final four ATP Tour events of the year.

The Canadian credited his coach Toni Nadal, the uncle and ex-coach of Rafael Nadal, for his recent success.

“He has been a great help to me. I have a ton of respect for him and his family. It is special to play Rafa with Toni here, but at the same time we are competitors, and we try our best,” said Auger-Aliassime.

Milos Raonic of Thornhill, Ont., is the only other Canadian to ever qualify for the ATP Tour World Finals, having played in the event in 2014 and 2016. Raonic lost in the semifinals in 2016 and lost both of his matches in 2014.