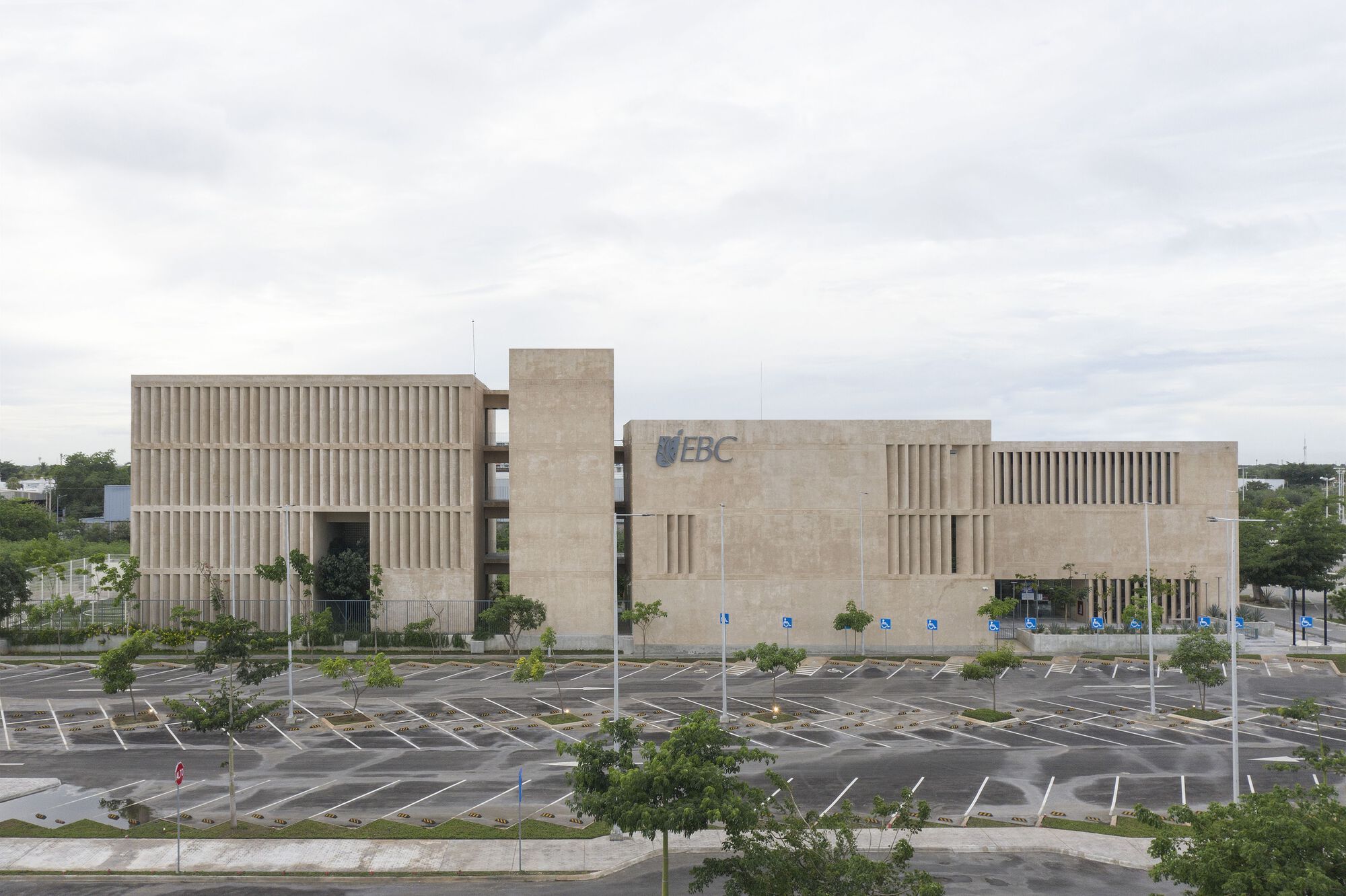 Text description provided by the architects. La Escuela Bancaria y Comercial (The Banking and Commercial School) is located north of Mérida and is the second campus of this institution in this city; the new building is located in a growing area and seeks to serve a greater number of students. For the development of this project, three particular factors were taken into account that determined both the layout of the building and its materiality and operation: the program, the terrain, and the bioclimatic characteristics of the region.

The bioclimatic characteristics of Mérida are extreme: it is very hot, and humid, with very high temperatures in direct sunlight. The windiness and raininess caused by repeated northern winds are also factors that must be resolved in detail. The appearance of the campus —solid and heavy— responds to its orientation and the arrangement of the uses that each volume houses. It is practically blind to the south, east and west, and completely open to the north, which avoids the changing light and high temperatures of this area of the country and seeks uniform lighting for all learning and workspaces. Its uniform materiality is composed only of chukum, a typical material of the region that provides durability and is of low maintenance.

The brief and the program for a campus of these characteristics is very particular and precise since it had to include 12 classrooms for 18 students, 9 classrooms for 30 students, and 7 classrooms for 40 students, in addition to classrooms equipped for online classes; an auditorium with capacity for 40 people, a multipurpose room that could be configured as an auditorium for up to 200 people, a cafeteria, a learning center with a library and work rooms, a courtyard to host events with the entire student community, a gym, an administrative area, and different service areas.

The lot is rectangular and narrow; 30 x 140 m that on three of its sides adjoin roads and only one with a future neighbor. The project is developed under a linear scheme made up of six buildings that house a fragmented program arranged in blocks. The uses of each building are distributed precisely, seeking to order the program in such a way that they activate the public and meeting space between buildings, and thus modulate the entire campus.

The first building is the access and administrative building. The second houses public and flexible uses, and has a multipurpose room, an indoor and outdoor cafeteria, and a learning center. This volume is positioned at the center of the campus; on its ground floor, it opens onto the central square and functions as a meeting point on each of its three levels. The third building is the tallest volume and has the smallest footprint; it houses the services and vertical circulations. The fourth building is the educational building, with 28 classrooms distributed on four levels. The fifth building, not yet built, is considered an extension with nine classrooms for the future growth of the campus. Today, its foundation is used as a multipurpose sports court. The sixth building is the only one-floor element and houses the equipment, machine rooms, and maintenance of the campus.

The layout of these six volumes generates spaces that, like squares, complement each other. The layout obeys the orientation and the solar incidence: the project operates as a great wall that generates shade over the public space; the central plaza is an open-air meeting space that remains in the shade for most of the day. On the other hand, the fragmentation of the volumes allows the wind to cross and generate cross-ventilation throughout the day and, instead of offering resistance, it allows the winds to cross in a fluid manner.

These six buildings are arranged on a central axis that connects both entrances on the first level, the main access, and the access to the parking lot. On the following levels, a linear corridor three meters wide and without interruptions connects each of the volumes through bridges, sometimes through its center and other times through its sides, where it grows to 4.5 m width and serves as an umbrella in the rainy season and in the face of strong northerly winds. In the last educational buildings that we have had the opportunity to design, we have focused our attention not only on the built space —the classrooms— but above all on the void and the circulations, on the spaces that connect all the classrooms with particular programs. In this case, this corridor that is formed in a different way at each level generates a meeting space outside the classrooms.