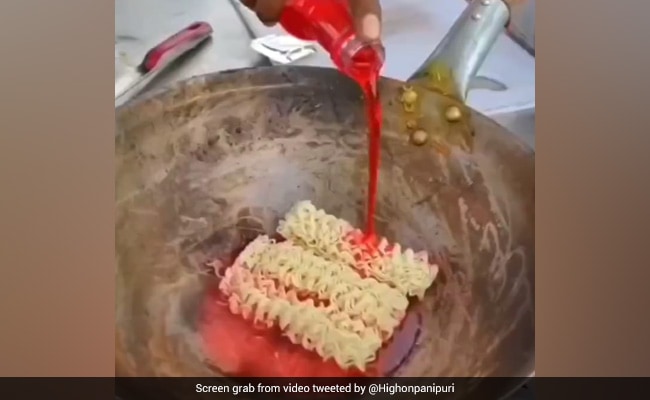 The video has left social media shuddering, with many showing their disgust.

These days, fusion dishes have become a new food trend on social media. While some of these fusion dishes are actually quite interesting, others are downright meaningless. However, no food has seen variations and experimentations, the way Maggi has.

The trend, however, seems to have gone too far, with bizarre combinations cropping up every day, which include Fanta Maggi, Chocolate Maggi, Pan Masala Maggi, Rooh Afza Maggi and many more. Now, another disastrous combination has surfaced on the internet in the form of ‘Sting Wali Maggi’. Sting is a carbonated energy drink which has a strawberry flavour.

A video doing the rounds of social media showcases Maggi made with the Strawberry flavoured energy drink. A Twitter user shared the video and expressed his disgust. He captioned the video as ”Khatam Tata Tata Bye Bye (everything’s over, bye bye)”.

The clip shows a man pouring Sting energy drink into a frying pan, instead of water, after which he opens a Maggi packet and adds the instant noodles to the beverage. He then goes on to add magic masala, onions, and green chillies to the combination. Once cooked, the dish is transferred to a bowl and handed over to a customer.

The clip has received around 2,300 views and the numbers are only increasing. The video has left social media shuddering, with many showing their disgust with the bizarre food invention. Netizens had a laugh over the recipe as they couldn’t see their favourite Maggi being “destroyed” like that, over and over.

Another unthinkable food combination that made no sense was Maggi served with cold coffee. In a video uploaded by RJ Rohan last month on Instagram, one can see a person making Maggi with cold coffee along with the cocoa powder. Towards the end, the man even garnished the cold coffee Maggi with tomato ketchup.