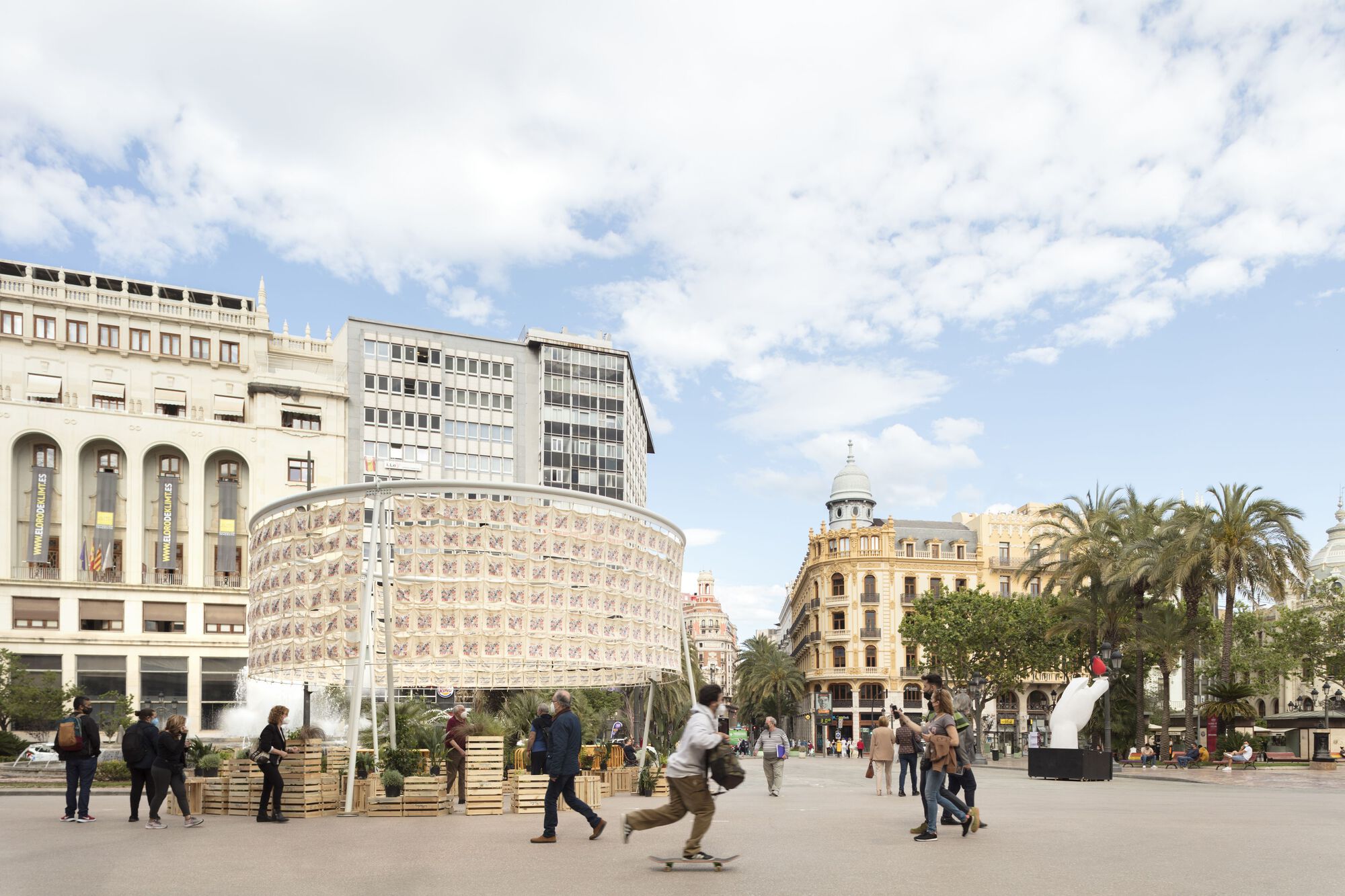 Text description provided by the architects. The square between Mercado Central and La Lonja is where market stalls were set up from the 16th century onwards. On these stalls products from across the territory were sold.

The landscape was shaped by awnings hanging from different structures for sun protection. It was under its shadow where people gathered for talking, trading, or resting purposes, so they were part of the daily movement of people in the market.

The global pandemic resulted in a postponement of 2020’s urban planning week until May 2021. The Plaza del Mercado’s refurbishment led to the displacement of the whole thing from Plaza del Mercado to Plaza del Ayuntamiento, including La Valentina’s installation.

La Valentina was a temporary installation that recovered the concept of a sheltering shadow creating place for gathering and sharing. Ephemeral and hanged from a ring-shaped structure. a set of tote bags enveloped the space and framed the domes and beacons of the Plaza del Ayuntamiento’s buildings.

The conceptual framework of this intervention was based on two fundamental exes; on the one hand, the lecture on the singular environment of the square, and on the other hand, the visibility achieved thanks to the urban planning week in terms of reflections on public space being brought to the table. The intervention was understood as a physical manifesto that expressed, small scale, the concerns of the urban gender-responsive urban planning. The recovery of scope for action recalls the market’s activities, aromas, tastes, and textures. The city is a booster of proximity consumer policies making it more sustainable and reducing single-use containers and plastics.

One of the intervention’s key objectives was enhancing public space as a trade one based on its landscape. Aromas, sounds, activities, or materiality are essential for enjoying the cities we live in.

As a starting point, it was proposed to use two essential elements which, in the collective imagination, are associated with the market: awning fabrics and wooden fruit boxes. The intervention suggested the creation of an open space that embraced the space creating a small agora to serve as a meeting point.

A ring-shaped central structure of metal was bearing the tote bags, creating shaded spaces on the boxes, emulating the market’s awnings. Wooden boxes were located on the floor, and planters and micro-topography games.

On the very last day of the urban planning week, the installation was utterly disassembled with neighbors’ and market users’ help. The tote bags, boxes, ropes, and plants were given to the attendees. The metallic structure was stored in expectation of a new final location in a city square or park.

12 Architecture Events to Pay Attention to in 2023