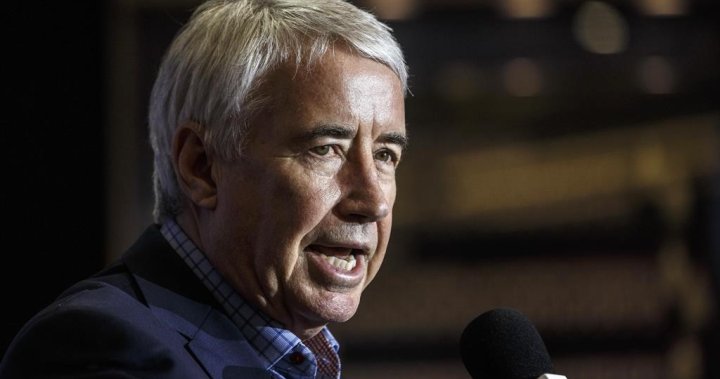 Bob Nicholson is proud of much of what he accomplished during his time leading Hockey Canada.

He pushed to improve on-ice safety and grow the national sports organization’s financial might.

Its former president and CEO also has regrets.

Nicholson apologized Tuesday during testimony in front of the Standing Committee on Canadian Heritage in Ottawa for not putting written guidelines in place on how Hockey Canada should handle sexual assault claims when he was at the helm from 1998 to 2014.

“I wish I could go back,” Nicholson told MPs via video link. “I wish I could have put more policies in. My job, as CEO, was to really run the operations. Policies came from the board, and I’m not deflecting that back to the board. I was the CEO, and I should have been encouraging more policies.

“That was something that I would have liked to have done — I didn’t — and I’m sorry about that.”

Nicholson added he’s satisfied with how the federation dealt with sexual assault and abuse claims throughout his tenure, which included settlements related to disgraced former junior coach Graham James, but those meetings shouldn’t have been held in camera without minutes being taken.

“We didn’t handle that correctly,” Nicholson said. “We had to focus more on the off-ice situations with players. I was dealing a lot with on-ice (safety).”


Hockey Canada has been under an intense microscope for its perceived toxic culture since May when it was revealed the organization quietly settled a lawsuit after a woman claimed she was sexually assaulted by eight players, including members of the country’s world junior team, following a 2018 gala in London, Ont.

The federal government and corporate sponsors quickly paused or halted financial support, but the ugly headlines continued with the revelation of the so-called National Equity Fund and how it was used to pay out settlements. The existence of two other funds for similar purposes has been subsequently revealed.

Hockey Canada, which said it had paid out millions to victims since the late 1980s, then announced members of the 2003 men’s world junior roster were being investigated for a group sexual assault.

Nicholson, who’s now chairman of the Edmonton Oilers, said he only learned of the situation in July at the NHL draft and has not been contacted by police.

None of the allegations have been proven in court.

Former Hockey Canada president and CEO Scott Smith resisted calls for his ouster in the wake of the widening scandal all summer and early fall before finally leaving the organization Oct. 11 on the heels of a disastrous heritage committee hearing.

The board of directors resigned the same day. A new board is set to be elected using fresh guidelines next month.

Tom Renney, who preceded Smith, assumed the CEO role after Nicholson departed in 2014 before retiring at the end of June.

Hockey Canada senior vice-president of strategy Pat McLaughlin testified Tuesday the organization has paid $1.6 million to crisis management firm Navigator since July, but emphasized no public funds have been used.

He added lost or restructured corporate partnerships have cost Hockey Canada as much as $24 million in funding.

“This has been extremely challenging,” said McLaughlin, who also appeared via video link.

“It comes at a significant cost to us, without question.”

5:00
What does the shake-up mean for Hockey Canada?


An independent third-party governance review led by former Supreme Court Justice Thomas Cromwell released earlier this month made a number of recommendations related to leadership, transparency and how the National Equity Fund — maintained by registration fees and used to pay uninsured liabilities, including sexual assault and abuse claims — should be managed moving forward.

“I am assuming that Hockey Canada has really learned from this and they will change their ways,” Nicholson said.

MPs repeatedly asked Nicholson about Hockey Canada’s use of non-disclosure agreements. He confirmed former women’s coach Dan Church and two assistants signed NDAs after leaving the program ahead of the 2014 Olympics.

“It was a number of very touchy subjects,” Nicholson said. “I’m sure that was the reason why it came back to my desk to have (the) NDA signed.”

He didn’t believe any players signed NDAs during his tenure and couldn’t say “exactly” how many allegations of sexual assault came across his desk over his 16 years in charge.

McLaughlin, who wasn’t able to provide details of any severance Smith received when he left Hockey Canada, said it wasn’t “lost on me” past and current officials were making an appearance at a fourth round of meetings on Parliament Hill.

“We have heard you,” he said. “Hockey Canada must change, and it must do so urgently. Canadians expect and deserve meaningful action. And our organization quite honestly, has been too slow to act.”

“Make no mistake, without those folks, there is no Hockey Canada.”