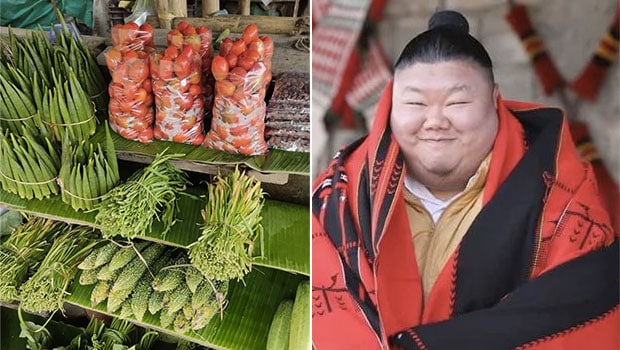 India is a land of so much cultural diversity, and our cuisine is proof of the same. No matter which state, region or city you travel to, you’ll find so many different kinds of food under one roof. The North Eastern states too have some interesting dishes and unique preparations that are slowly being explored by foodies and travellers. A common myth in people’s minds is about the food served in the northeastern states, such as Nagaland. They often wonder whether Naga cuisine is fully meat-based or does it have some vegetarian options as well. Nagaland’s Minister Temjen Imna Along took to Twitter to bust the myth in his latest post. Take a look:

All these organic healthy veggies and still we choose French fries. 🍟

See how those fresh veggies are inviting you to Nagaland.

Nagaland’s minister Temjen Imna Along shared his tweet responding to a user who asked him whether vegetarian food is available in Nagaland. “All these organic healthy veggies and still we choose French fries,” wrote the minister in his tweet. It has already raked in over 2.9k likes and hundreds of comments.

In the pictures he shared, we could see bunches and stacks of fresh vegetables such as tomato, okra, cucumber, beans, gourd, mushroom and spinach. There were also some fruits such as bananas, mangoes and strawberries to be spotted in the frames. Bamboo stems were also visible in the frame, which is commonly used in Naga cuisine. “See how those fresh veggies are inviting you to Nagaland. Isn’t it alluring enough? P.S. Someone asking me whether they will get veg or not in Nagaland,” added Temjen Imna Along in his tweet.

Twitter users loved the post about Naga cuisine and how the Minister busted the myth about there being no vegetarian options. A few people were also impressed by the way the vegetables were stacked up and displayed on banana leaves. “They are the farmers mostly, bringing their products directly for sale,” revealed the minister in the comments section. A few wanted this fresh vegetable and fruit produce to be sold in the big cities also. “Important to promote local and seasonal produce AND local and seasonal cuisine to further boost the local economy as well as tourism trajectories,” wrote one user.

Take a look at the reactions:

Make the road connectivity better so that those fresh vegetables 🥕 can be transported easily for sales in other places and don’t get rotten in the villages and towns .No 🧠— Nagaland #Messi (@NagalandMessi) November 13, 2022

This is not the first time that a food-related post by the Nagaland minister has gone viral. He regularly shares pictures and information about his favourite food, much to the delight of Twitter foodies. Recently, Mr. Along shared a picture of his dinner meal on Rajdhani express while travelling to Dimapur from Guwahati. Click here to read more about this story.