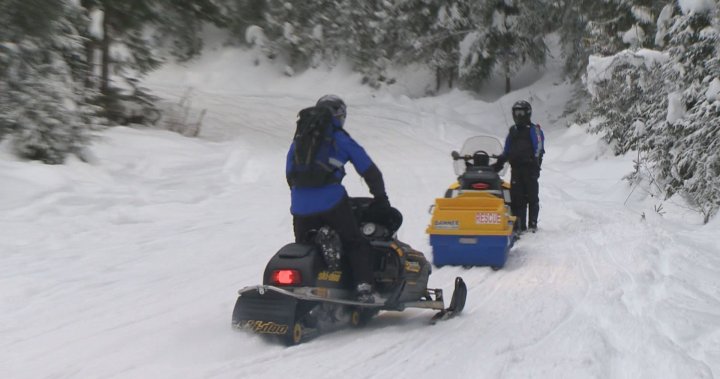 Just after 1 p.m. on Friday, Vernon Search and Rescue received a call about an injured snowmobiler in the Hunter’s Range area near Mara, B.C. It was the earliest winter-season rescue the organization has ever responded to in its history.

“Our first go is to deploy a sled team, but with unknown injuries and potential of serious nature, we called in a helicopter,” explained VSAR Search Manager, Coralie Nairn.

Nairn added that despite snowfall across the valley, the base can be deceptive, with hazards often lying just beneath the surface.

“The challenge is that the snow is still low, so having a shallow depth of snow, there’s obstacles in the way and if you strike something there is a potential that you will incur an injury,” said Nairn.

Vernon Search and Rescue provided some tips for those who plan on heading out into the backcountry this winter.

“We’ve received a fair bit of snow early on, so people are eager to get out there,” said Nairn.

“It’s important to bring survival equipment that you need, extra clothing is always great, and base layers. And going where you say you’re going to go, cause having a place to start is really important when you’re overdue for search and rescue.”

Technology can also play a critical role in the safety of those who head out into the mountains.

“AdventureSmart has a free trip planner that’s electronic, so you can message someone, and if you’re overdue it’ll give you a little leeway, and then it’ll actually message that person saying ‘hey, so and so hasn’t checked in yet.’ So trip planning is great before heading out,” described Nairn.

The Ambulance Paramedics of BC also stressed the importance of wearing a helmet when skiing or snowmobiling in the backcountry.

“One of the injuries we do see quite commonly is people not wearing their helmet in the backcountry, and definitely if we could advise everyone, don’t just leave it in your backpack, actually put it on,” they said.

Each winter, VSAR says it gets called out to an average of 21-25 rescues.