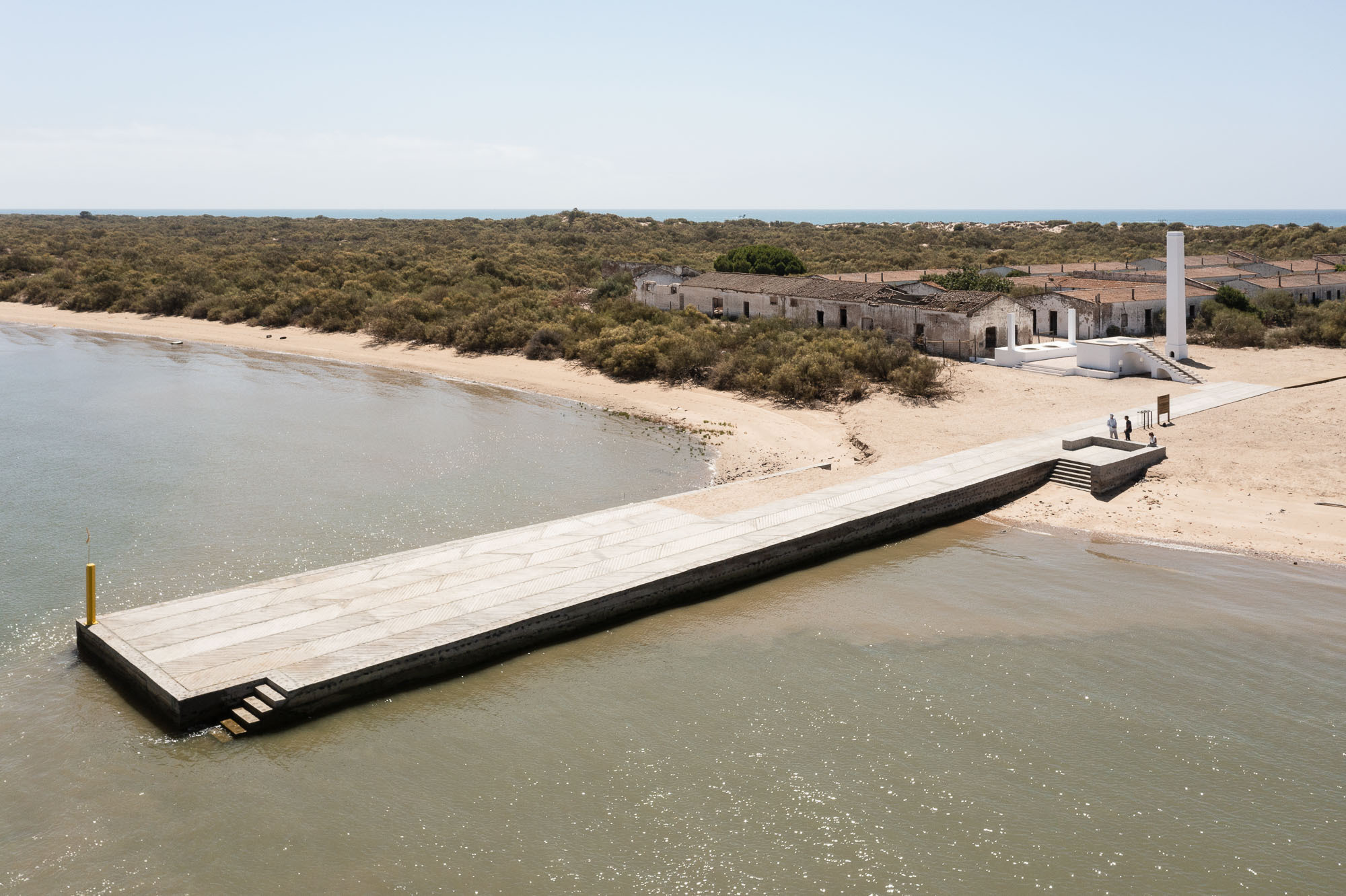 Text description provided by the architects. Real de la Almadraba was built in 1929 and, once abandoned in the seventies after four centuries of being dedicated to the art of tuna fishing on the Huelva coast, it was declared BIC (Bien de Interés Cultural, a category of the heritage register in Spain) in 2015. It is located in the protected natural area of Flecha del Rompido, made up of three well-differentiated areas: a residential area formed by a series of buildings situated as a camp where the workers of the Almadraba used to live; the House of the Captain, a building of greater standing and somewhat removed from the rest of the complex; and the set of buildings that allowed the maintenance of fishing gear, made up of the jetty, the diesel cabin, the tar smelting boiler, its chimney, and the tar pit.

The intervention concerns these last buildings and is completed with a new pedestrian path that joins the two banks: the mouth of the Piedras River and the Atlantic Ocean. The reform is divided into two areas, the jetty and the diesel cabin, which was in a state of ruin with only its traces remaining, and the boiler, the chimney, and the tar pit, which were in a better state of conservation, although in need of a considerable intervention. The jetty was a floodable building built with local stones functioning as a dam. We can find this type of jetty in other trap sets in Andalusia, using a building method that dates back to Roman times. The challenging conditions of execution, due to the tides at the mouth of the river and the complex supply conditions in this natural area led us to rebuild the jetty with a technique close to the Roman manner: from the trace of the old jetty, using its remains as a foundation, a perimeter wall of cyclopean concrete was built with local grauwaca stone by means of tilings that took advantage of the low tide for its implementation. These walls, reinforced with fiberglass instead of steel to avoid corrosion problems, are braced by a lower and an upper screed, forming a caisson capable of absorbing the strong horizontal thrusts of the river current. This form of construction also provides a tectonic quality where the concrete, poured in batches and subsequently crushed, allows the native stone to emerge and form a stratified, almost geological volume, closer to the origin of this type of jetties and in accordance with the protected complex and the river edge. Finally, the upper layer that makes up the pavement of the pier is grooved by means of a mold executed in situ that, printed on the fresh concrete, generates a herringbone pattern, a motif that is repeated in the Real de la Almadraba on the pavements that were dedicated to the draining of the molten tar.

On the other hand, the reform of the boiler, chimney, tar pit, and drain, uses philological criteria as its starting point, thanks to the fact that its state of conservation, although deficient, allowed us to deduce the construction techniques and the finishes that had been presented in the past. The part of the boiler is accessed from the grooved pavement of the jetty. From this point, it is possible to understand the entire process of protecting the fishing gear with tar. The boiler is made up of two ovens and a chimney that presides over the complex and is reached by climbing up a staircase with a central area that presents a padded section that allowed the ascent of the barrels of tar, which was melted and passed to the tar pit where the fishing gear was hung from a clothesline between two pilasters that descended into the two pits of molten tar with a pulley, thus submerging the nets. Finally, the nets went to the draining shed, where they were left to dry and the excess melted tar was recovered through the grooved floor, now imitated on the jetty. The restoration has been carried out by hauling ceramic pieces found on the site, thus reducing the need for input of material and guaranteeing the compatibility of its behavior, and with lime mortars and silicate paint that favor the transpiration and gives the whole complex an appearance that refers to its original state, where the white volumes, whose refined geometry came from their strictly functional use, stood out in the landscape.

The third intervention in the area enables an accessible path between the two banks. The high landscape value of this protected natural area suggests carrying out a reversible installation by means of a wooden pedestrian path that gradually enters the thicket of broom and prickly pear shrubs. The geometry of this walkway results from crossing the two powerful dune ridges that precede the Atlantic Ocean, thus avoiding strong earth movements that would alter the existing landscape and excessive slopes that would prevent access for people with reduced mobility. The path begins with a platform directly resting on the ground to limit the cost. It is gradually raised on stilts when it is necessary to reach greater height to bridge the continuous differences in elevation, offering impressive views. The design of the walkway and the railings is based on the usual industrial systems, although the brackets have been modified so that the protective elements of the railing are also fastening, resulting in a more abstract element that crosses the landscape without denoting its scale, while preventing the pedestrians from accessing the natural area outside the scope of the walkway, thus protecting the jonquil, thistle, lily, sea rocket, as well as the nesting of harriers, storks, and egrets.

This project concerning a protected landscape and an architectural complex has tried to recover the industrial meaning of the trap fishing process, thus revealing the patrimonial and ethnological heritage of an ancient fishing art that coexisted in tune with the landscape of the Huelva coast.